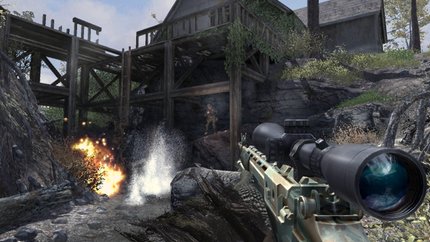 Gotta love console gaming these days, back in the day, once a game was out, that was it. Now, it can live on for years with add-ons, new missions, and map packs.

Infinity Ward has four maps waiting in the wings for your folks who can’t get enough of COD4. Most of COD4’s maps consisted of Middle Eastern and Russian cities/factories, so its good to see something new. The maps include a TV station called Broadcast, a large-scale outdoor map called Creek, Chinatown, and a map titled Killhouse (no details on that one)

Creek will be a decent sniper level, and the TV station level is all indoors, taking the entire helicopter/air strike option out of the mix (I know some people hated that).

I do have to be honest, I’m still convinced Rainbow Six: Vegas 2 is gonna take up all my time, but, who knows, this could be a reason to pick it up again.