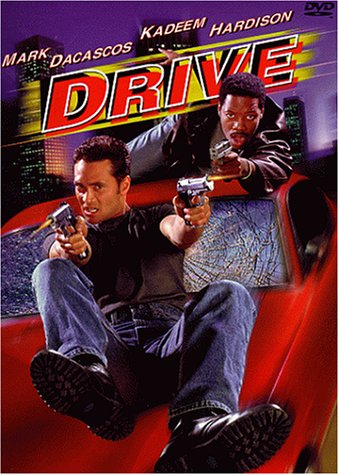 Mark Dacascos probably isn’t a household name. Maybe you know him from when he starred in the Saturday afternoon television series, ‘The Crow: Stairway to Heaven,’ making him the third person to don the white make-up and portray Eric Draven/The Crow.Or possibly when he presided over Kitchen Stadium in ‘Iron Chef America: The Series’ as the Chairman for a year. But as the rest of his career has resided almost completely in direct-to-video action movies that, in most cases, shouldn’t be bothered with, you probably don’t know him. But if you’re a self-respecting fan of the action genre, you should know him because in 1997 he starred in a film that I consider the best martial arts/action movie out there: ‘Drive.’

The story goes like this: Toby Wong has an implant in his heart that makes him a super-fighting machine. He is heading from Hong Kong to where a company is willing to buy the implant for a few million. Toby enlists Malik Brody, an unemployed, wannabe songwriter, to drive him to the company with the promise of half the cash when they get there. Meanwhile, the makers of the implant want to get Toby back, sending a bounty hunter and posse after him. When the bounty hunter can’t capture Wong, the makers send an upgraded version of Toby to stop him. And all sorts of ass-kicking happens along the way.

It sounds like a generic action plot and that’s because it is. The magic of ‘Drive’ isn’t in the story’s ingenuity; rather it lies in how the film handles the generic, first and foremost: the action scenes. Mark Dacascos’s martial arts work is unbelievable in this picture. The fight scenes are long, well choreographed and blend everything from hand-to-hand combat to weapons fighting, from Capoeira to Jeet Kun Do. Dacascos almost seems to be channeling and blending everyone from Bruce Lee to Jackie Chan as he uses his environment and the props around him to make for what I consider to be some of the best fight scenes captured on film. That may sound like hyperbole to you, but if it does, that just means you haven’t seen the movie yet. The fight in hotel and the final fight between the two “turbo-drives” stand out as the best in the film, although they definitely don’t dwarf the other scenes. For the fights alone, this film is superb and should be watched by any action fan.

But the film has more than just good action. ‘Drive’ is actually really funny, too. Dacascos and Kadeem Harrison (who plays Malik) work really well as a pair and play off of one another in such a comical way that, were the fight scenes not present, I’d probably still watch the movie and recommend it. ‘Drive’ also features a young Brittany Murphy as the truly bizarre Deliverance Bodine, the girl who is watching the hotel Toby and Malik stay at while her parents are away. Her flirtations with Malik are crazy and weird, which makes their interactions fun to watch. And John Pyper-Ferguson’s turn as Vic Madison, the bounty hunter responsible for bringing Toby in alive, is perfect as he offers some of the film’s most quotable lines. (How can you not smile when you hear the line, “Of course he’s good. He could eat flour and shit cupcakes”?!)

Steve Wang’s direction on this film turned what could have easily been another cliché addition to Mark Dacascos’s direct-to-video resume into an action film that has a brain. ‘Drive’ is focused in its blend of superb action and great comedy, placing it high on the list of buddy flicks. If you’re an action/martial arts junkie, you’ll want to add this movie to your collection as it’ll be in constant rotation with all of its “holy shit, I got to see that again!” scenes. And if you’re just a casual fan or in the mood for a fun afternoon diversion, ‘Drive’ is a great choice and a good demonstration of why we action junkies are the way we are. This is the movie Brett Ratner wishes he could have made with the ‘Rush Hour’ series. Watch it. Now!

Don’t believe me? Watch this.