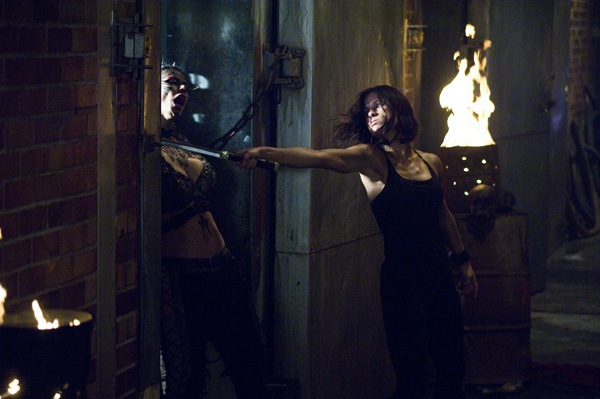 I guess just looking at the trailer, one could write off Doomsday as a version of the Mad max series. When one sees Doomsday in the theater one may leave feeling like that just watched a female lead version of the Mad Max series, and pretty much they have. Directed by Neil Marshall the mind behind the horror films The Descent and the underrated Dog Soldiers comes the story for fighting for survival through natural selection.

The story starts off present day, with a deadly virus called ‘The Reaper Virus’ already sweeping the land of Scotland and England. The government has created a wall in which they plan on cutting the land off and keeping the land contained. Well, naturally, things go awry. And the bloodshed of a military stand off begins. Jump 25 years later. The now once dormant virus has returned and found its way inside the safe zone. The government quickly sends a team into action to go on the other side of the wall and find a cure. And the film pretty much goes on and on from there.

This is your basic movie with obvious plot points and themes we have seen come and go so many times that one can simply write it off. But under the direction of Neil Marshall, it doesn’t really breath life into the futuristic desert and wasteland that other movies have shown us before. It just takes a different, enjoyable angle to it all.

Equipped with a bigger budget, a better knowledge in filmmaking, and a creative mind, Doomsday does thrill with its action and its violence. Casting Rhona Mitra (you may not know the name, but you know the face) as the lead was a smart move on hotness alone. Plus, giving Malcolm McDowell and Bob Hoskins supporting roles in roles they do best, that being an anti-social person with power and a high ranking official trying to do what is best, respectively, will pretty much earn this movie a small cult following in a few years. But not right now.

Violent and gory as most movies are these days, Doomsday tries and succeeds to an extent of being creative and entertaining. A fight near the middle of the film, involving the lead and an unknown actress (Lee-Anne Liebenberg), mainly because she is a stunt person in an actors role, gets a little cliché with the swords being used. But the finishing move to end the fight was pure enjoyment and the little badass chick moment, not a one liner, but physical response of throwing the sword at a bystander makes this movie worth it. And the movie is filled with those responses.

Not for the squeamish, but definitely for those that just like violence, gore, and entertainment alone. You may wait for DVD or you may hop into the theater to see it. Either way, worth seeing at least once, one way or another.