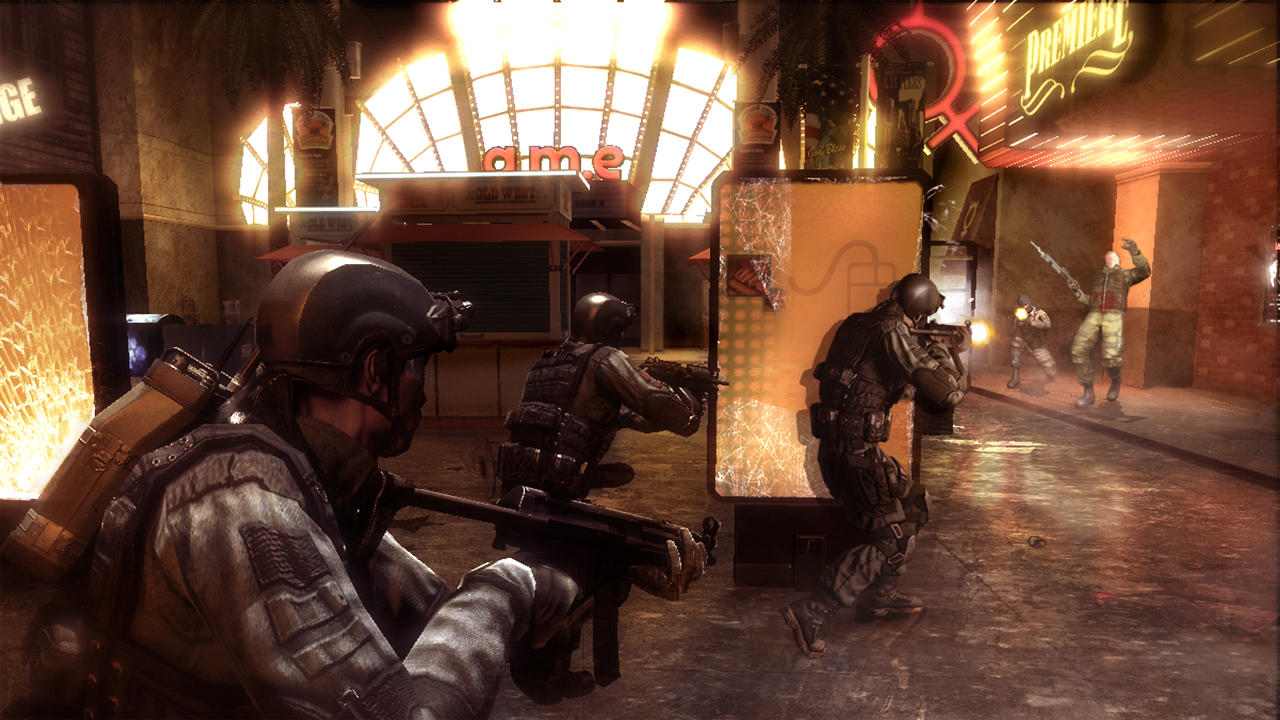 With Vegas 2 coming out this week, we take a look back at the evolution of arguably the best tactical shooter ever to be released.

A spin-off of Clancy’s Jack Ryan series, Tom Clancy’s 1998 book focused on John Clark who is named director of a new elite multinational counter-terrorist organization named Rainbow. Often times, its the book/movie and then the game, not in the case of Rainbow Six. Just prior to the release of the book, the first game, Rainbow Six, was released to PC platforms. The developer of the first game, Red Storm Entertainment, was a company founded by Tom Clancy to create titles solely based on his books. The company has since been purchased and remains a subsidiary of France based game publisher, Ubisoft.

Red Storm was developing this tactical shooter independently, and based on the FBI Hostage Rescue team, it was only when Clancy revealed that he was writing a novel about counter-terrorists, that elements from his novel were included in the book. It was late in the game when Red Storm started adding elements from the novel, which explains the departures from actual plot points in the book.

Rainbow Six, unlike most first-person shooters, focuses more on stealth and tactics. In the first release, each level was preceded by a planning stage. Players

would receive a briefing and choose their team members. The most unique element in entire game was drawing paths for the team. For example, which team member would breach where, where they would hold positions, etc. A good plan would even allow the player to sit back and let the CPU do the work!

When the mission starts the player then takes control of the team leader, but can switch to any of the other team members. Also, if a team member were killed-in-action, they’d remain unplayable. Unlike other shooters at the time, the player was unable to see the weapon in their hands.

The first sequel, Rogue Spear, was much like the first Rainbow Six. The first shift in its design came with the third sequel, Raven Shield. At this point, Red Storm had been acquired by Ubisoft, and the game, though remaining a realistic tactical shooter, began to represent more mainstream first-person-shooters. Raven Shield was built in Unreal Engine 2.0, and aslo had a redesigned multiplayer system. The gameplay was a huge departure from the first two releases. There was no longer a planning stage, or the ability to take on other teammates. 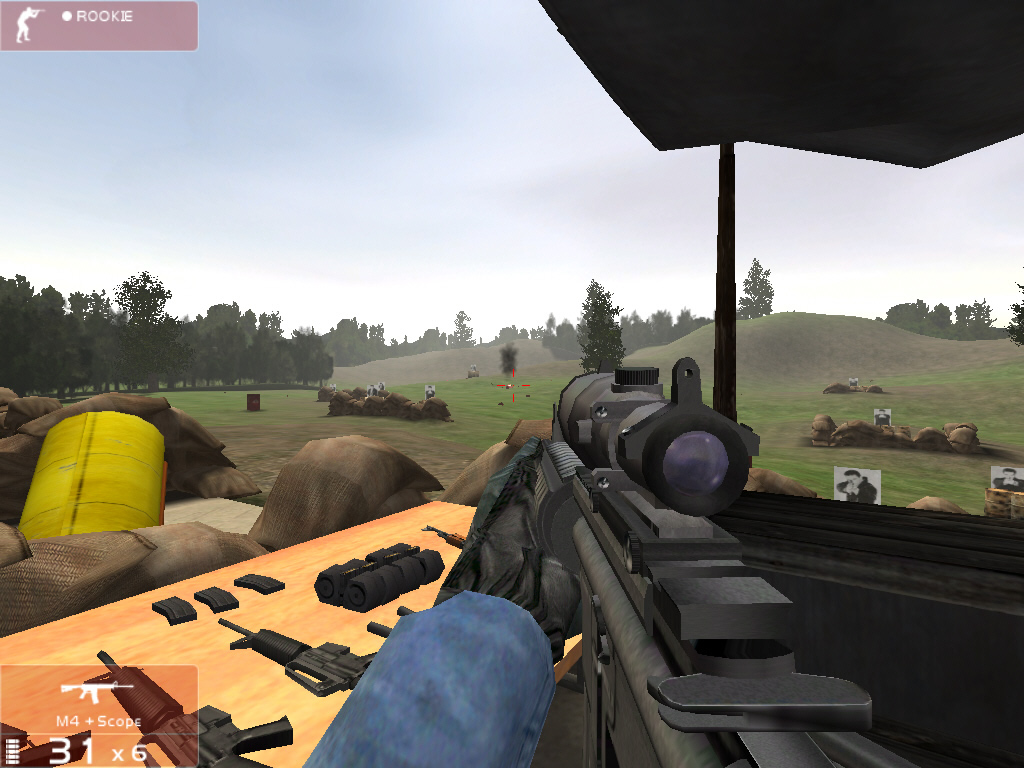 In Ravem Shield, Players again entered the shoes of Ding Chavez. Orders were able to be issued to teammates during the missions, with improved squad AI. Released on PC, Xbox, Gamecube, and Xbox, the story follows the Rainbow Six crew hunting down Neo-Fascist terrorists. The Xbox version of the game utilized the consoles Xbox Live functionality, and allowed for additional downloadable content. Xbox also allowed for voice commands via the Xbox Live headset.

The fourth game, Rainbow Six: Lockdown was similar to the third release of the series. The most unique part of this release was the Xbox-exclusive Persistent Elite Creation mode. This allowed players to choose a “career,” such as commando, combat medic, engineer, and spec-op. Light-RPG like elements allowed stat points to be distributed among various skills for each career set. Missions in Lockdown were broken up into linear levels, instead of single non-linear maps like the previous versions.

This finally brings us to the fifth game in the Rainbow Six Series, Rainbow Six Vegas. Released on Xbox 360, PS3, PC, as well as a PSP version, Vegas saw the biggest leap in design in the history of the franchise. Rather then the traditional health system, Vegas introduced a regenerating health system (seen in games like Halo, and Call of Duty 4). After injury, players have to find cover until they regenerate health, and much like Gears of War, vision is impaired during low health.

The biggest development in gameplay was the introduction of cover & fire. Players can walk up to a corner/wall, and enter a third-person mode, where you can peek out from corners and aim and fire, or blind fire your weapon. Rather then the cut-scenes in the older games, the story here is told primarily in-game and through video feeds. The game also introduced a personal favorite, fast rope & rappeling up and down buildings.

The story in Vegas features a brand new Rainbow team, with main character being Logan Keller. The games main story is a massive terrorist crisis in Las Vegas. All the casinos and locales in the game are fictional, but the look and mood of the game feels s till feels very convincing. 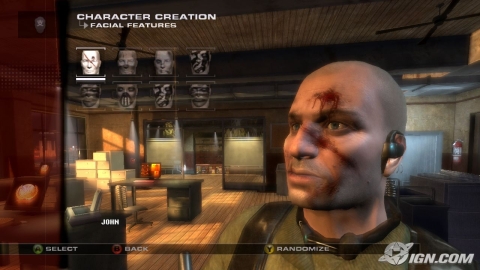 The multiplayer mode in Vegas was excellent, it featured the Persistant Elite Creation mode introduced in Lockdown, and had ten different multiplayer game modes on the Xbox 360, Survival, Team Survival, Sharpshooter, Team Sharpshooter, Retrievel, Co-op Terrorist Hunt, Attack & Defend, Co-op campaign, Assassination, and Conquest. Players could use the Xbox Vision Camera to actually put their own faces on their characters! As players earn experience in the different game types, new equipment and weapons are unlocked.

A weaknesses on Xbox Live was the inability to join games in progress, which has been rectified in Vegas 2. The game also featured Dynamic ingame advertising, often replacing posters with movie posters. Despite the positive reviews, the game was a bit under the radar. Vegas 2, picks up where Vegas left off, with much needed improvements across the board in the multiplayer side of the game. Gameplay, mechanics, and the look and feel have been improved, but other then that, it’s not much different then Vegas. One can argue, why change a good thing, so these slight changes are welcomed with open arms.

I’ve been looking forward to the release of Rainbow Six: Vegas 2, since its announcement, and I’m happy to say, that time is here. I’ll see you in the firefight this week.