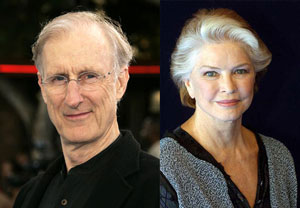 Yesterday we reported on the casting of Elizabeth Banks as First Lady Laura Bush in Oliver Stone’s ‘W’ biopic. Actor James Cromwell will be stepping into the shoes of former President George H.W. Bush, and Ellen Burstyn will be playing his wife.

The film is set to be released in the Fall, just prior to President Bush’s exit from office. Stone co-wrote it with Wall Street co-writer Stanley Weiser.