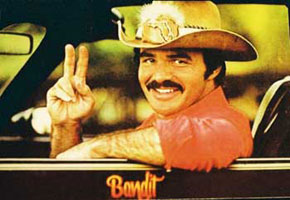 Ok, so this week’s title may be a bit confusing. Burt Reynolds not driving a car? That’s like peanut butter without the jelly, or Martin without the Lewis or S without the M. That’s not only unthinkable, it’s un-American. I’ll be the first to grant you Mr. Reynolds has a great career as a car driver. Hell, throw just ‘Smokey and the Bandit’ and ‘Cannonball Run’ up there and you’ve won yourself an argument. But there’s another side to Burt’s career that is sorely overlooked. This is where this column comes in. Oh, and we’re talking Burt in his prime. Not Burt wearing boxers and cowboy boots and covered in Vaseline, like in ‘Striptease.’

No, we’re only going for the good stuff.

Rough Cut
I’m just going to list the first three cast members to you: Burt Reynolds. Lesley-Anne Down. David Niven. Oh, and it’s direct by Don Seigel. Are you sold yet? Because you should be. The movie’s about two high-end thieves who team up to steal $30 million in uncut jewels. Lesely-Anne Down plays Gillian Bromley and Burt Reynolds plays Jack Rhodes but he might as well be called Burt Reynolds because Burt is not the world’s greatest actor. However, in this film it doesn’t matter, because the story and the action is just enough to keep you entertained. Sadly, it was one of director Don Seigel’s (‘Dirty Harry,’ ‘Invasion of the Body Snatchers’) last films.

Shamus
I’m going to start off by giving you the tag-line to this movie. ‘Shamus- A pool-shooting, card-playing, broad-chasing, private eye…cross him, and he’ll blow your head off!’ Have you added this to your Netflix queue yet? What if I told you this movie was directed by a guy with the first name of Buzz? Burt plays a detective named Shamus McCoy, who sleeps on a pool table and ends up bedding Dyan Cannon. Shamus, and the movie itself, seems based on Raymond Chandler’s books and the character of Philip Marlowe. It’s a fun, fast-paced detective movie. Oh, and Shamus’s cat is played by Morris, the 9-Lives cat food pitch feline. With all this information, you’ve gone out and bought a copy, right? Good.

The Man Who Loved Women
Woah, curveball. Coming hot on the heels of ‘Smokey and the Bandit 3,’ and ‘The Best Little Whorehouse in Texas,’ Burt’s star began to fade a little and he also tried to stretch out his acting ability in this remake of the Francis Truffaut movie. Reynolds plays David Fowler, a man who, would you believe it, loves women. Those women are played by a variety of actresses, including Kim Basinger, Marilu Henner, Sela Ward and Denise Crosby. Julie Andrews narrates the movie. She is Marianna, Reynold’s psychiatrist. The movie is directed by Blake Edwards, and does a good job of balancing the comedy of the situation with the sadness of the story. (The movie opens with Fowler’s funeral.) While it was the failure of this movie that seemed to encourage Reynolds agree to only do movies where he would stare, shoot guns and, of course, drive cars, it’s a shame. It’s films like this that reminds you that he is a good actor and has never really had a chance to shine.