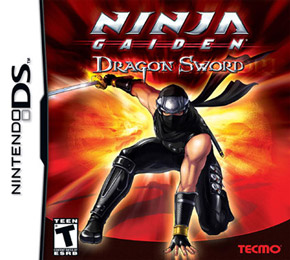 What you’ve got in Ninja Gaiden is an excellent action packed adventure game with a creative control scheme and great story. I’m a little harsh lately on DS Games, I love the system, but it seems that so many of the third party titles are sub-par, poorly developed games. Ninja Gaiden is quite the contrary, it is an excellent release from Team Ninja.

Dragon Sword picks up six months from where the first title (Ninja Gaiden on Xbox) left off, following the Dark Dragon Blade incident. After a brief training with Momji and Ryu, you take control of Momji as she embarks alone, and is taken up by a dragon sent by the Black Spider Ninja Clan. You then step into the shoes of Ryu and begin looking for the Black Spider Clan to save Momji.

The game has you hold the DS vertically, much like the Brain Age. The controls are almost all stylus, with the exception of hitting any button for blocking. The game explains various moves by swiping the stylus in different ways, for example sliding up then across enacts a flying move, running the stylus over your character quickly powers him up, and letting him go releases the energy in the form of ass-kicking goodness. The controls are extremely intuitive, players will be experts in moments.

The action is great, and they do a lot with the weak specs on the DS. The environments and your character are not exactly 3D, but everything has a very stylish look to it, and the music is great, some of the sound effects get a little repetitive, but again, there’s a lot of substance, story, and style here. The game is a tad short at 6/7 hours, but its definitely one of the stronger titles to come out for the DS in the past few weeks, and even more so if you are a Ninja Gaiden fan.