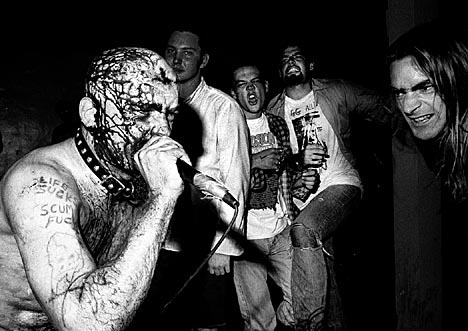 Every time I see some 17 year old girl wearing a t-shirt that says “I love punk rock boys”, I laugh my ass off. I laugh because I think deeply into the meaning of that shirt. I like to picture these same preppy chicks come face to face with the king of Punk Rock, G.G. Allin.
I imagine them wandering up to some dumpster outback of a hole in the wall N.Y restaurant and finding a dirty, smelly hobo-like man lying in a heroin stooper soaked in vomit, feces and urine. I wonder if they would like “punk rock boys” after that experience.

G.G. Allin was a disgrace of a human being, and that is what made him so awesome. Never before have I seen someone with such a blatant disregard for everything that the world had to offer. He rejected pretty much every notion of civilized life. He did, said and beat up whomever he wanted. That, in a sense, is the essence of punk rock. These kids who wear those super tight jeans, have a shaggy haircut, wear those shitty bracelets with 2008 brand Goonies t-shirts and carry around a Mr. T lunchbox all bought at Pac Sun…these kids are not punk rock. Punk was a rebellion which shouted at individualism. How can you be an individual if you look like everyone else? Punk should never be a trend. GG embodied that philosophy.

I’m not really sure what to write about the guy. He never got to complete his grand masterpiece of rock n’ roll, which was to kill himself on stage at what would obviously be his final show. Instead, his actual last concert ended up with him playing about 10 minutes of a set, and then rioting in the streets of NY with about 100 insane, drunk fans behind him, only later to die that night like a rockstar cliché with a heroin overdose. I suppose that is a decent end to a career that went from insane to fucking insane in a matter of 10 years. Never before did I see a guy who would just drop his pants and shit on the ground and throw it at people, without any shame or care at what he was doing. Too bad I was only twelve when he finally did kick the bucket, or I would have been in the front row…er…well, maybe in the back row, at one of his shows.

GG was actually born Jesus Christ Allin, I kid you not. His mother begged his father to legally have his name changed to Kevin Michael Allin, which his father agreed to. GG came from his brother Merle trying to say Jesus Christ as a little baby. All that came out was GG, so the nickname stuck. His upbringing was obviously troubled so he bottled it all up inside and instead of going the easy path and becoming a serial killer like it seemed he was destined to be, he decided to become a rock n’roller. Kudos!

If you have never heard a GG Allin song, I recommend that you give it a shot. I’m sure there is something in his catalog that will offend you. With gems like:
I Wanna Piss On You
Expose Yourself To Kids
Shove A Cross Up A Nuns Cunt
Bite It, You Scum
Eat My Diarrhea
And the beautiful acoustic ballad; “When I Die”.
If you can’t find something in there that bugs you, then GG has failed
in his mission.

There are not really many words that can sum up this animal’s life. In fact, this article is about as shitty as his career. GG is something that needs to be experienced, not just read about. I recommend you check out the documentary “Hated” for a better picture of just who this sociopath punk rock God really was. You won’t regret it, and if you do…well awesome, then he has done his job. And next time you see some teenie bopper wearing a “Punk Rock Boy s Are Soooooo Cute” t-shirt, make sure to tell them to “Suck My Ass It Smells.”