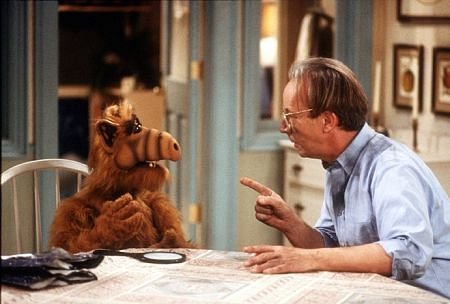 Authorities are reporting today that Lovable TV character ALF was found dead in the red light district of Detroit today, due to an apparent overdose of cat. Witnesses on the scene report that he was out of control and causing a major disturbance the entire evening as he hopped from strip club to pet store the entire evening.

John W., owner of “The Kitty Club” had this to say of the nights events: “Yeah I saw ALF last night, he was so f’d up that he was literally snorting cats straight off of one of our dancers legs. I ain’t never seen anything like it before!”

That was the last account of him being seen alive however, as security cameras outside a local pet stop captured ALF, accompanied by several prostitutes, entering the lobby of an hourly motel across the street-after first purchasing a dozen cats. He was found the next morning, tied up, clad in leather and with several fluffy tails sticking out of his mouth.

ALF will not be remembered for just the way his life tragically ended, however–some of his friends recollect the good times. Former guardian/best friend Willie Tanner gave us his thoughts on the life of ALF: “ALF never had it easy, crash landing here from the plant Melmac, being found by network executives and forced into sitcom slavery at such a young age–of course you’re going to develop some self destructive habits along the way. But, I can certainly tell you this, the ALF that I’ll always remember is the one that I sheltered in my home from the government for 4 years circa 1986 and became a member of my family.”

ALF was 83 episodes old and leaves behind many relieved cats.