Rob Zombie’s directorial debut, ‘House of 1000 Corpses,’ should, by all accounts, be a train wreck. Given the production drama, the distribution drama and the film’s content and approach, ‘Corpses’ should have been DOA and his follow up ‘The Devil’s Rejects’ would probably have never been made. But, despite its shortcomings, ‘House of 1000 Corpses’ is actually a pretty good movie. Is it great? No, not by a long shot. But while it won’t go down in the annals of horror history amongst the films that it references, it is a solid entry into the larger pantheon of fun horror distractions.

‘Corpses’ tells the story of four teens who are traveling throughout the countryside to research and write a book. Low on gas, they pull into Captain Spaulding’s of and Madmen where they learn of the legend of Dr. Satan. Wanting to see the tree where Dr. Satan hung himself, they get a map from Spaulding, a trash talking clown, but on their way there, pick up a hitchhiker and blow a tire. The hitchhiker brings the group to her house and the shit hits the fan as the four teens meets the Firefly family, a sadistic group of homicidal maniacs who torture, abuse and experiment on the teens.

The film, perhaps not surprisingly, plays out like an 88 minute White Zombie music video. Scenes are inter-cut with shots of classic horror films and psychedelic effects, almost as though Zombie had too many ideas but wanted to put them all in. Zombie’s obvious appreciation for B horror movies shines through and the characters he created in ‘Corpses’ could 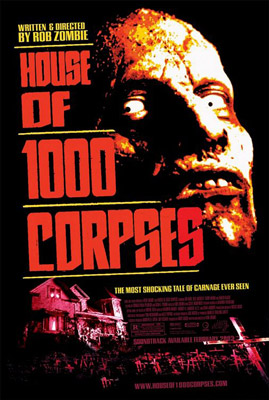 have easily been in one of the countless films Zombie grew up watching. The thing with the characters, though, is that most of them work pretty well. Otis Driftwood, Baby Firefly, Mother Firefly and Captain Spaudling (who steals every scene he is in) are all coherent, fluid characters (it was obvious to see why they were the ones who moved onto ‘The Devil’s Rejects’). The teens were there to be an outlet for the Firefly family to do what they needed to do, so while they were kind of annoying, they should have been. And, as a side note, Chris Hardwick’s turn as teen Jerry Goldsmith was surprisingly annoying/good. I wasn’t wowed or ready to see him in more, but he was pretty competent for the former host of MTV’s ‘Singled Out.’

Also, despite the music video, acid trip approach to the editing, ‘House of 1000 Corpses’ is surprisingly even paced for the hour and a half. The film moves fluidly from scene to scene and does a good job at engaging the audience with either its visceral, shocking scenes or its competent story. Rob Zombie, as a first time feature director, was clearly comfortable with what he was doing and while the film had its weak points, they weren’t anything that were detrimental to the overall film.

Like I said, ‘House of 1000 Corpses’ isn’t a great film. The biggest shortcoming of the film was the fact that it wanted to reference all of the old, classic B horror films and simultaneously be a classic B horror film; it was sort of like watching a well put together mix tape. Zombie approached ‘Corpses’ with the same intensity on both fronts and ultimately the film didn’t get to either. The second biggest flaw with the film was the ending. Given the freight train approach the film took, it was going to be hard to find a way to effectively wrap it up. Unfortunately, the film didn’t rise to the occasion and the final scenes with Denise and Dr. Satan were…cartoony. There’s no better way to describe that. But the blah ending certainly didn’t steal from the fun that ‘House of 1000 Corpses’ had for the rest of the film. Personally, I hope Zombie decides to make a film about Captain Spaulding. Sid Haig, as Spaulding, was well worth the price of the DVD alone.

*As an aside, watch the bonus feature on the DVD called “Tiny Fucked a Stump.” I have no idea what this is about or why it’s on there, but holy crap is it funny/weird.