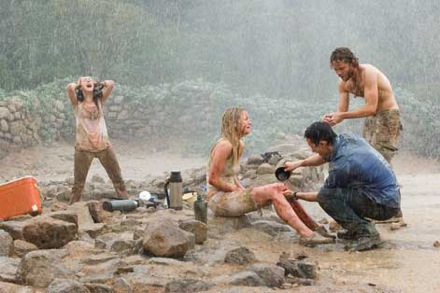 Formula films almost never redefine a genre. They don’t tend to push boundaries and their predictability tends to leave a blah taste in the mouth of the witnessing audience. But sometimes a formulaic film surprises.

Carter Smith’s feature length directorial debut, ‘The Ruins’ is an example of such an occasion. I didn’t expect to like this film too much walking into the theater thanks to the tireless campaigning MTV did for the picture. The last time a film had been over-hyped by commercial after commercial after commercial on MTV was last year’s Dane Cook/Jessica Simpson joint, ‘Employee of the Month.’ We all know how that turned out. However, leaving the theater I found myself surprisingly pleased with what I had just watched.

Based on the best selling novel of the same name by Scott Smith, who also wrote the screenplay, ‘The Ruins’ sits firmly in the horror formula that inspired and spawned it. Four post-collegiate young twenty-somethings are in enjoying some downtime before the rest of their lives begin. They meet Mathias, whose brother is out exploring an ancient Mayan temple that “is not on any map.” Mathias convinces the group to join him in visiting the ruins on their last day of vacation. Once they arrive at the temple (after being dropped off by a taxi and pondering how they will possibly get back as the taxi leaves them in the thick of the jungle) they are met by a group of what I assume are Mayans, who try to convince the five to move away from the ancient structure. However, once Amy accidentally steps on one of the plants covering the ruins, the Mayans quickly change their mind and force the five up to the top of the temple, keeping a constant vigil to ensure they don’t leave. Once at the top, the pack soon learns what happened to Mathias’s brother and begin to understand why the Mayans don’t want them to step foot off of the ruins.

Like I said, the film is pretty formulaic. But what ‘The Ruins’ does is embrace and execute the formula well, creating high tension and suspense for the 90-minute duration of the film. The five main actors, all relatively unknown or somewhat obscure (Shawn ‘Iceman’ Ashmore and Jena Malone are the only two actors I recognized), do an excellent job of dealing with and reacting to the situations at hand, thanks in large part of a script that never seems to go over the top. Indeed, the film’s strongest point is that the cause of the Mayans’ alarm and fear of the temple, and the catalyst for the twenty-somethings’ breakdown, exists only to spur on the drama; it’s never the focal point of the tension. Instead, ‘The Ruins’ works because it focuses on their reactions to their situations. At this point I’m being purposefully vague as to what that “catalyst” is. Not that it’s a huge spoiler because, as I said, it’s almost more of a MacGuffin than anything. But all the same, a reveal is a reveal and I’ll let you have your reaction to it if you’re still blissfully unaware of what it is. However, I will say this: once it was revealed my initial reaction was, “Oh. I’m not really scared of that.” I then went on to be on the edge of my seat for the rest of the film.

Another thing that worked really well for ‘The Ruins’ was the direction. For anyone who as seen Neil Marshall’s ‘The Descent,’ you know that caves are scary, claustrophobic and make for great psychological head games for the characters and the audience. ‘The Ruins’ knows this and played up that aspect of the scares in the beginning of the film. But then it switched and spent the rest of the film outside, on top of the temple. And for such a large, open area, director Carter Smith created an incredibly claustrophobic atmosphere. Tension was created out of the situation, not necessarily the environment. And speaking of the environment, most of the horror took place during the day. The film would occasionally seem to set itself up for some night scares, however, Carter took a different approach and had most of the action take place in the highly visible mid-afternoon sun. So for creating tension in an open, well lit environment, ‘The Ruins’ gets a plus in my book.

Overall, ‘The Ruins’ won’t be going down as a great addition to the horror genre. A formula film is still a formula film and as such, it can only really go so far. However, as a fun distraction one night, I recommend heading out to see ‘The Ruins’ for that fun feeling you can only get when you watch someone desperately do surgery with a rock atop a Mayan ruin.