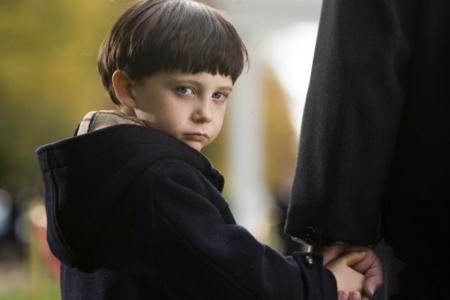 If cinematic history has taught us anything, it’s that kids with bowlcuts are creepy. Case in point, ‘Village of the Damned,’ or ‘The Shining,’ or, either version of the story of the spawn of the devil himself, ‘The Omen.’ (This particular series has also taught us that Sam Neil with a bowl cut is extra creepy. Make of this what you will.)

Richard Donner’s 1976 original was hardly an untouchable masterpiece. Overly melodramatic, and ridiculous, it was still a fun movie. After all, if you can’t have fun with a kid mentally willing nannies to hang themselves at his birthday party, what can you have fun with?

So, as 2006 rolled around, it seemed only natural that if one movie needed to open on June 6, 2006, it was ‘The Omen.’ Liev Schreiber takes over for Gregory Peck, playing Robert Thorn, an American diplomat. Julia Stiles is his wife, who, as the film opens, gives birth to a baby boy. However, the child dies. A priest at the hospital takes Mr. Thorn aside. Another mother has just died giving birth. Her baby has lived. Instead of subjecting his wife to the traumatic news of their new son’s death, maybe Thorn could take the baby whose mother just died and pass it off to his wife as their own spawn. Sure, why not? I mean, what could go wrong there?

Then strange things start to happen. The nanny, as mentioned before, hangs herself at the kid’s birthday party. (I know balloon animals are boring, but, man, way to drive home the point.) A new nanny arrives. Played by Mia Farrow, Mrs. Baylock shows an unnatural devotion to the child. A priest, who tried to warn Mr. Thorn of strange anomalies in his son’s life is impaled by a falling crucifix. A newspaper photographer, (played by David Thewlis) begins to make strange connections. And finally, after his wife is almost killed, Thorn begins to believe that his kid is not the best candidate for a Montosori education.

This version of ‘The Omen,’ is actually pretty good. It’s a tense film, even more impressive when you know every note that’s going to be played. The story is practically identical, with very little standing out as different from the original film. Director John Moore does a good job with the story, with some cool shots, (especially Julia Stiles’ fall, and her reoccurring nightmare images.) Sure it’s a little over the top, but it’s an omen movie, what were you expecting?

Is it a great movie that you simply must check out? Not really. Is it the worst thing ever, helping, in its remaked-ness, bringing about the end of cinema as we know it? Surprisingly, the answer is no. While no new ground is dug in the seemingly never-ending well of Satan against the world movies, ‘The Omen,’ is a good scare and a good thriller. Recommended. -Sam