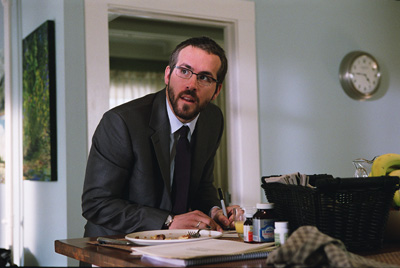 Frank Allen likes to keep his life organized. He writes lists obsessively. He keeps note cards with him at all times to order his life. He even is on the lecture circuit, telling others how to organize their lives. So when he meets up with a woman at a bar after his lecture and she asks to go back up to his hotel room, Frank stops writing on the cards. He’s nervous. She comes on to him. He freaks out and leaves. And then Frank’s wife calls. The woman, rejected by Frank, answers. Frank’s wife assumes the worst.

On his panicked drive home, Frank comes across a pregnant woman going into labor. He takes her to the hospital and fills out what paperwork he can. Then the woman disappears and the hospital assumes that Frank is the father. Oh, and then Frank’s wife finds out.

If these scenarios strike you as humorous, that’s only ten minutes of ‘Chaos Theory.’ The movie stars Ryan Reynolds as Frank, with Emily Mortimer as his wife and Stuart Townsend as the best friend.

‘Chaos Theory’ is an odd movie to describe, in a way. Sometimes it’s a comedy played for broad laughs. Misunderstandings are constantly happening and Frank keeps changing his lists as he becomes unhinged. However, it’s also a drama, where the misunderstands yield heart-felt moments and each character spill their guts to one another.

It is here where ‘Chaos Theory’ delves into… well, look at the title. It’s a schizophrenic story with an overly simplistic storyline to tell the audience things it already knows. Wait, family is important? Who knew? Your wife and daughter love you? Big shock. This movie treats these thoughts as earth-shattering revelations.

Ryan Reynolds is a likeable enough guy, and he and Emily Mortimer try their best with what they’re given. Unfortunately, they aren’t given much. The story is all too ‘TV-movie-of-the-week’ to really ring true.

The direction by Marcos Siega is solid enough and the look of the movie is good and fun. However, the whole thing takes place in a nameless, faceless suburbia, which doesn’t do anything to add character to the story.

All in all, ‘Chaos Theory’ is a miss. And it’s a shame. With the strong talent of the cast, it’s too bad that they couldn’t have a better story to work with. Suburban discontent as genre is fine, but to what end? You have to care about the characters if you want to care about their problems. –Sam