They were different, but there was something familiar about what they were putting out. They had pop hooks, but also had hip-hop beats. And they had a smash single with the song, “Crazy.” Gnarls Barkley’s 2006 debut, St. Elsewhere took music listeners by storm. There was a point where you couldn’t turn on a radio somewhere and hear “Crazy” or any of its countless covers. The rest of the album was fun and upbeat, with surprisingly not-upbeat lyrics. St. Elsewhere was huge and with that kind of charging out of the gate, fans were left wondering if it was a one off event or if Barkley could sustain its magic. 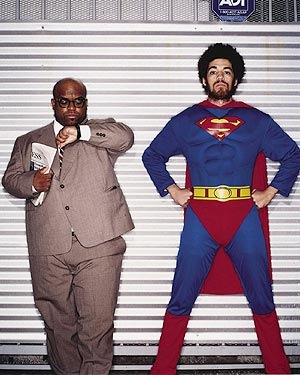 With their sophomore album, The Odd Couple, Gnarls Barkley respond with a solid “yes” to the sustainability question. The duo have released another infectious album that continues to show their love for strange musical pairings with great pop results, but this time they seem to let their true colors show, which is saying a lot for a group that is known for hiding in Star Wars and various other fun costumes. Danger Mouse, probably best known for his now-not-so-underground-anymore cult hit, The Grey Album (mixing Jay-Z’s Black Album with remixed samples of The Beatles’ White Album), created a sonic landscape that, while still upbeat on some songs, also laid a more melodramatic foundation for Cee-Lo’s more somber lyrics. Indeed, Barkley have further embraced their soul roots with great results, especially with the song, “Who’s Gonna Save My Soul,” the second track off of the album. The almost heart-wrenching tune lets the listeners hear what was only lyrically nodded to on their debut album, St. Elsewhere, namely an underlying sadness.

But it’s not all moody and morose. The fun Gnarls Barkley still exists. Take the first single, “Run (I’m a Natural Disaster)” a song that is reminiscent of Gloria Gaynor’s “I Will Survive” in its spirit and delivery. “Surprise” is another great tune with a strong upbeat tempo. But even in the seemingly upbeat tunes, there’s still that emotional weight mixed in. The album’s opener, “Charity Case,” is a perfect blend of upbeat and sad. And it’s here that you get to listen to what truly makes the album an odd couple: the stylistic blending of Cee-Lo and Danger Mouse who take soul and hip-hop and create hip-pop. While there are some blah tracks on the album (by the time you get to the track “Blind Mary” you get the sense you’ve already heard these songs somewhere before on the album, probably due to their somewhat repetitive nature). But these misses don’t hinder The Odd Couple. A great second outing for an odd couple.