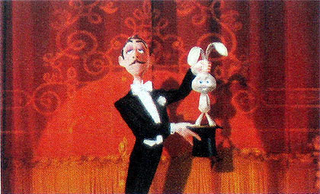 Pixar is known for cool shorts before their movies.  Continuing in this tradition, ‘Presto’ will be the 5-minute short to be shown before ‘Wall-E.’  The Pixar Blog:

The film is described as featuring a turn-of-the-century magician named Presto DiGiotagione, who’s become famous for an astounding hat trick. His rabbit Alec is dissatisfied as he shares none of Presto’s wild success. While Presto is out eating a lavish dinner, Alec is left behind, locked in a birdcage with a carrot tortuously out of reach.

This is much like the story arc of my life.  I am the mastermind behind naked woman, but do I get any of the credit?  Nope.  Jesus and his dad get all the credit.  But deep down I know Jesus is up there saying, “nice work with the boobs Brandin,” and giving me a thumbs up.  Besides boobs, I am also the mastermind behind linking them to innocent cartoons.   Genius.