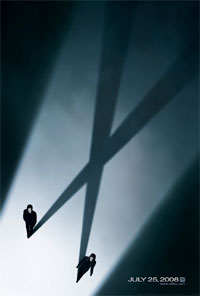 Oh fudge. Chris Carter has released the official title for the upcoming X-Files sequel and it is….’X-Files: I Want to Believe.’ That sound you hear is probably the air escaping from my happiness balloon. Now I didn’t really think the first movie’s title, ‘X-Files: Fight the Future’ was particularly inspiring, but at least it had some conviction to it. Despite what comes, they’re going to fight it. This title makes it sound like the movie is going to take a crack at something. Kind of a hit or miss thing. I want to believe, but who knows? Suppose something comes up and I can’t believe. I don’t want to make that kind of commitment.

Now I’m not totally deflated about this movie just because of the title. I’m still pretty excited to see what Chris Carter has up his sleeve. And it’s not that I don’t get the reference to the poster in the television show. But all the same, I think the title is just kind of blah. But I’ll keep hoping. I do want to believe.