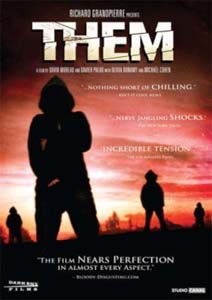 Today I’d like to take a look at the recently released suspense/thriller, “Them” (originally titled Ils in France) by director David Moreau and Xavier Palud.

Supposedly based off of true events, “Them” begins by throwing us right into a car accident, where a mother and daughter wreck their minivan on the side of a deserted highway. This has event has unfortunate results and sets the tone for the rest of the movie. From there we skip to the next day and are introduced to the two major characters of the rest of the film- a couple, Clementine (Olivia Bonamy), and Lucas (Michael Cohen), that live together off the beaten path in a rural area of France. Clementine is a new teacher at the school in town and Lucas is a writer whom appears to work out of the home. Everything seems to be proceeding normally for this couple when one night Clementine wakes up and realizes that her car isn’t parked outside the house anymore. What follows is a pretty tense game of cat and mouse when the “home invaders” make their presence known and start after our previously happy couple.

To start, let me begin by saying that “Them” was a decent movie. While there aren’t any glaring faults with it, it did have some issues that held it back from being as good as it could be. For example, apart from a few paragraphs of text at the end, the “home invaders” never seemed to get any sort of explanation or reasoning for doing anything that they did. Now I’m not saying they needed to go into great detail on their motives, but something other than an “oh by the way” at the end would have been appreciated. This also appears to have contributed to the rather short runtime of 77 minutes – if you’re not going to expound upon any of the characters at least they kept it short to make the chase more palatable and less boring in the long run.

Another issue I had with “Them” is that it caused me to do something that I really hate doing during suspense or horror type movies- watching the characters do something on screen and saying to myself “what the hell is wrong with you, why don’t you just…..” . For whatever reason, the movie made me question the main characters choices at times, thus taking me out of the movie a bit.
Case in point #1-you’re on the top of a balcony with a ladder coming up to it from the ground, you can clearly see one of “them” coming up at you on the ladder. Do you do the sensible thing and tip the ladder over-thus really hurting your pursuer? Or do you yell and run the other way, letting him follow you. Guess which one happened.
Case in point #2-you almost get run over by your own car, you realize there are people after you, and it’s very dark/disorienting outside. You manage to make it back up to your easily fortifiable bedroom on the second floor with two entrances that are both extremely easy to barricade. The clock says something like 3:30 in the morning, meaning you only have to hold out another 3 hours or so until it’s light out and you can assess the situation/reasonably go for help. Do you stay put like you should? Or do you decide to wander through a dark house to see “what’s up.” Guess which they chose.
Ninety percent of the time suspensions of disbelief or dumb character decisions are not a problem for me, but I think in this case it bothered me a bit, because I expected a little more from this movie and that was cause to take me out of the moment.

Overall, “Them” was a good movie. Not a great movie, not a bad movie, just a good movie. The perfect setting, the able and convincing actor performances, and a couple of the shock moments, were all solid points for this movie. The only problem here is that most, if not all of those elements have been done before-and better in my opinion- in similarly styled and themed movies. The first one that pops into my head is another French thriller called “High Tension”. It has a similar theme to it, but was executed far better-taking a concept that is good here and making it great. This left me wanting to have seen something more from “Them”, instead of what I actually received in the end.

One thought on “DVD Review: Them”