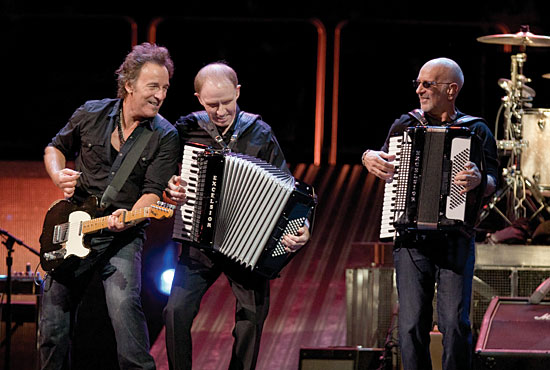 Sad news from E Street. Original E Street Band member Danny Federici has died. Federici was fighting melanoma. He had been the keyboard and organ player for the band for 40 years.

Bruce Springsteen released the following statement: ‘Danny and I worked together for 40 years – he was the most wonderfully fluid keyboard player and a pure natural musician. I loved him very much…we grew up together.’

Federici was on leave from the band to focus on his illness. Springsteen and the other members had remarked recently that his fight was going well and that they were hoping he would be joining them soon.

I caught one of Federici’s last full shows with the band back in November. He played with them on some dates since then, but didn’t play the whole show, due to the taxing nature of a three hour concert. At that show, Springsteen kept calling Federici down to play center stage. The audience was also incredibly appreciative of Federici’s talents and you could see that the outpouring of support touched him.

Springsteen’s concerts in Florida on Friday and Saturday have been postponed.