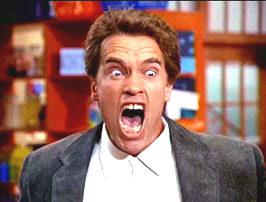 Before he was called “Governor of California” but after he was labeled “Mr. Olympia” 6 times in a row, Arnold Schwarzenegger had another title that went a little something like this: “Most Awesome-est Action Star, Like, Ever.”Indeed, thanks to his breakthrough performance in ‘Conan The Barbarian,’ Mr. Schwarzenegger basically became an action movie genre unto himself. Known for his hulking physique and his seemingly endless stream of one-liners (each made extra-special thanks to their delivery in that Austrian accent), is film legend at this point. And despite arguments of the lack of “quality” in his movies (to which I say to you, film snob, “chill out”), has made many an entertaining film, most of which can fit nicely into this little column here. My first (of many, I’m sure) choice for Mr. Schwarzenegger’s appearance in Saturday Afternoon Sweetness is his 1990 film, ‘Kindergarten Cop.’

Why ‘Kindergarten Cop,’ you ask? Because, faithful reader, this movie has everything that makes great. Schwarzenegger plays Detective John Kimble, who along with his partner, go undercover in the town of to find the wife and child of drug dealer Cullen Crisp, who they 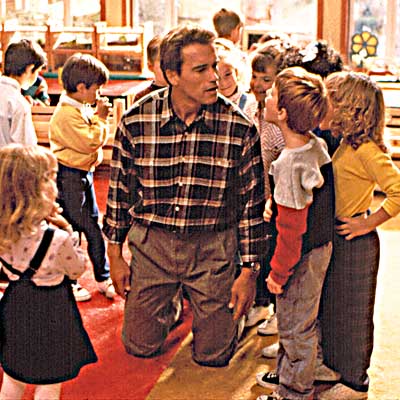 have finally arrested after years of hunting him. Their hope is to find Crisp’s wife to get her to testify against Crisp in court. Kimble’s partner takes on the undercover role of a substitute teacher, but when she has a medical emergency, Kimble is forced to take on the substitute teaching job. And hilarity ensues with this fish-out-of-water story of a hard nosed, rough and tumble, gruff police detective who’s “in a class by himself!” as the tagline of the film notes. Yes, ladies and gentlemen, the story has everything from ’s previous film career thrown into a blender and pushed out for your viewing satisfaction. It has the action stuff of ‘Total Recall,’ ‘The Running Man’ and ‘Predator’ and combines it with the he’s-a-big -guy-known-for-big-action-so-it-would-be-funny-to-see-him-feeling-out-of-place-in-a-cute-role of ‘Twins.’ The result is a surprisingly coherent movie by Ivan Reitman.

The action is decent and the comedy is great and for that alone it’s an excellent use of 2 hours of your Saturday afternoon. But what really sets ‘Kindergarten Cop’ a head above the rest is the vast amount of quotes that offers up. Yes, this is Mr. Schwarzenegger at his finest. Below is a choice sampling of the greatness ‘Kindergarten Cop’ has to offer*:

*Note: All of these lines must be read in an exaggerated Schwarzenegger accent. You know the one.

Kimble: We’re going to play a fun game called “Who is my daddy and what does he do?”

Kimble: I have a headache.
Kid: Maybe it’s a tumor.
Kimble: It’s not a tumor!

Kimble: No more complaining. No more, “Mr. Kimble, I have to go to the bathroom.” There is no more bathroom!

Guy: Who are you man?!
Kimble: I’m the party-pooper.

Yes, ‘Kindergarten Cop’ takes full advantage of little kids and Arnold facing off to great aplomb. Picture ‘Kids Say the Darnedest Things’ and ‘Arnold Schwarzenegger Says the Darnedest Things” mashed together. It’s great fun and totally worth your time from 2 to 4 on a rainy Saturday afternoon.