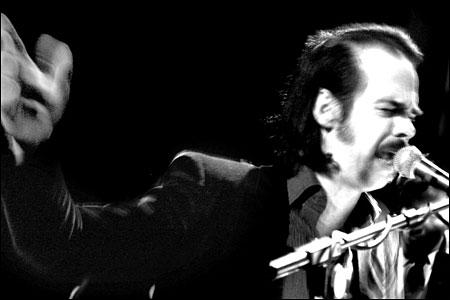 You’d think that after 20+ years in the business of making music that one of his 14 albums would be kind of a dud, but here we are with and the Bad Seeds keeping the awe inspiring streak alive with his latest release, Dig, Lazarus, Dig!!! The 14th album by Cave, Dig is inspired by the biblical tale of Lazarus, as Cave explained on his official site: “Ever since I can remember hearing the Lazarus story, when I was a kid, you know, back in church, I was disturbed and worried by it. Traumatized, actually. We are all, of course, in awe of the greatest of Christ’s miracles – raising a man from the dead – but I couldn’t help but wonder how Lazarus felt about it.” Inspiration found, and the Bad Seeds went forth and produced one of their best albums to date.

First off, it seems rare that the album art could so effectively set the tone for the album, but Dig, Lazarus, Dig!!! has a cover that summarizes the feel of the album so perfectly that you can’t help but marvel at the thought behind the simple but overwhelmingly effective decision to put the title up in big neon lights. Indeed, on this outing, Cave’s approach sounds almost like a showtune in its bombast and bigness. Beginning with the opening track, ‘Dig, Lazarus, Dig!!!,’ the album sounds huge and epic and doesn’t slow down as Cave and the band move through each tune with focus and a purpose. This is yet another non-single driven album and the result if a 55-minute journey into what feels like a twisted Broadway rock musical like only Nick Cave could do with his atmospheric, almost Lovecraftian prose lyrics. The standout tracks include the infectious and impatient ‘We Call Upon the Author’ and ‘Albert Goes West,’ although each track on the album brings something purposeful and interesting to the table. 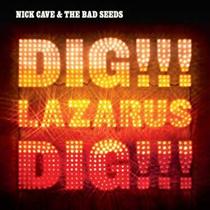 I don’t know what agreement with who has made, but it’s clear that whomever he made a pact with, he came out on the better end of the deal. Dig, Lazarus, Dig!!! is an amazing, raucous, well thought through album that belies the man’s years. This roaming troubadour of the morose has clearly has something to say, and with Dig, Lazarus, Dig!!! he trumpets his song and story that you can’t help but follow him to the depths of musical purgatory.