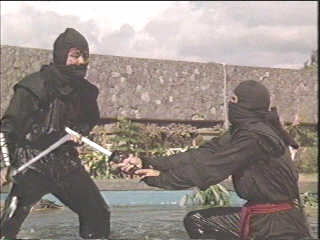 I promise I’ll deviate from the action movies at some point in this column, but today’s pick is just too sweet to have it charge out of the gate in a later installment. Today’s pick for the Saturday Afternoon Sweetness is a movie that I first saw on television one Saturday afternoon and from there on out was a staple of my young movie geek life. It had everything I needed in a movie: ninjas and motorcycles. I speak of a little Michael Dudikoff movie called ‘American Ninja.’

‘American Ninja’ follows Dudikoff as Joe Armstrong (can you guess who the American ninja is?), enlists in the Army (he joins a base in the ). He is a loner and doesn’t say much, which leads the other Army dudes to taunt him until Corporal Curtis Jackson decides he’s had enough of Armstrong’s bad attitude and picks a fight with him. This is where learns that Armstrong has ninja skills in a cool fight scene where Armstrong ultimately subdues with a garden hose. This, of course, earns Armstrong Jackson’s respect (who doesn’t respect ninja mad skillz?). Meanwhile, the Army base falls under attack by ninjas who are stealing the base’s weapons. It turns out that one of the locals, Victor Ortega, is a weapons dealer who has an army of ninjas to do his bidding. Of course. This ultimately leads to a showdown when the American Ninja and Jackson must take on Ortega’s ninjas and ultimately, Black Star, the head ninja. Oh, and they kidnap Joe’s girlfriend, so hell yeah they made it personal. 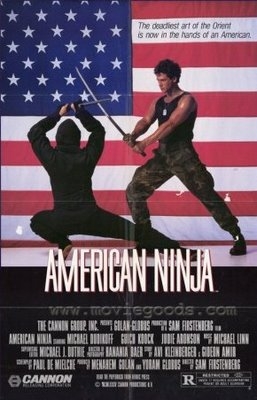 Like I said, this movie has everything a guy could want on a Saturday afternoon. Oh to live in a world where bad guys use ninjas as their enforcers. Gangs don’t seem to care any more. From what I can tell from these movies, bad guys in the 80s always had martial arts bad asses around to protect them and do their bidding, they were really into kidnapping girlfriends and almost always secretly knew a lot of martial arts. Ortega has a pretty bad ass ninja training facility, too. Now it’s all guns and petty drug dealings. Where’s the heart? Where’s the love? Where are the ninjas? ‘American Ninja’ shows us a simpler time when ninjas were heavily involved in everything illegal. So much so that ‘American Ninja’ went on to spawn 4 sequels, most of which are equally entertaining on a Saturday afternoon (except for the red-headed stepchild that is ‘American Ninja V.’ Not even Pat Morita’s presence could save that one.). If you want to remember when ninjas ruled, look no further than ‘American Ninja.’