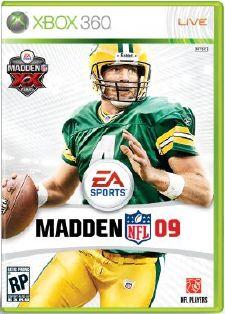 “Brett Favre is a perfect fit for the Madden NFL 09 cover, as he epitomizes everything the franchise has stood for the past 20 years — longevity, excellence, and a love of football.”

‘Madden ’09’ has been a staple in gaming since it began in 1989, despite the controversy behind its yearly releases (citing the fact that sometimes, the only change are the stats, which could be available through a download or patch).

There are quite of a bit hardcore Madden fans out there, though, I’m certainly not one of them. MLB though? I’ll take more of that. The game will release on August 12th for Xbox 360, PlayStation 3, Wii, PlayStation 2, Xbox, Nintendo DS, and PSP.