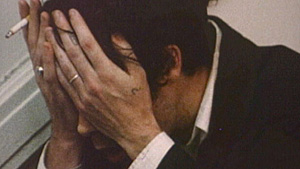 ‘Frownland’ a first feature from Director Ronnie Bronstein is a black comedy about a door-to-door coupon salesman who can’t hold a conversation with anyone but his analyst.

Keith, the main character finds himself unable to express himself to anyone, not his supposed friends, not even his musician roommate.

Ironically, the film is unable to express itself to its audience. With long, dragged out scenes of Keith just stumbling, stuttering, unable to say anything. The film, though with humorous moments, really didn’t have very much to say along the lines of a story.

I’ve seen feature films where nothing happens, but ordinarily there is enough to pull you in. This film was absent of that. It wasn’t until the Q&A where Bronstein started explaining the development process where I realized what he’d done. He’d developed these characters with the actors, and then started shooting when they were ready to “meet.” Not adhering to idea that a film should cut out the non-interesting parts of a character’s life, he simply just presented the character in his day-to-day life at that exact moment of his life. Struggling at his job, living with his dead-beat roommate who hates him, stalking an acquaintance, trying to console a crying student that shows up at his doorstep.

Besides the lack of any interesting dialogue due to a protaganist that is unable to speak, midway through the film, we go off on a tangent with Keith’s roommate as he takes a test to administer LSAT exams. One might beg the question, why?

I’m a strong believer in the idea that a film should captivate an audience. I shouldn’t have to sit through a Q &A with the director to make sense of his intent in the story. The situations that we learned about should have been included in the movie. In all honesty, the film dragged, and the message could have been conveyed via a short. Just one of the scenes of Keith’s inability to communicate would have been enough.