‘Grand Theft Auto IV’ was a release I’d been anticipating since I heard about it. The franchise as a whole had been something of an obsession since its first release. So we’re gonna take a look back at the history of the franchise.

The idea of a sandbox world where a player could roam freely wasn’t something that was prevalent in video games when the first Grand Theft Auto was released in 1997. Coming from DMA Design (Now Rockstar North), Grand Theft Auto brought the player into a world of crime. Participating in deliveries, car bombings, bank roberries, assassinations, etc. The first release featured three cities, Liberty City (New York City), San Andreas (Los Angels), and Vice City (Miami). The game was popular, but slightly under the radar.

The second game was set in the future, and featured the same top down perspective, with slight improvements in game play and graphics.

This was where the franchise took a big leap forward. Leaving behind the top down view, developers decided to use a 3D engine, the game was not level based like most games at the time, but mission based. The player would run around, stealing cars, and performing various tasks for different characters within Liberty City (whose look was based on New York).

For the first time, copies of GTA were flying off the shelves, and the success of the game brought on the release of GTA Vice City. 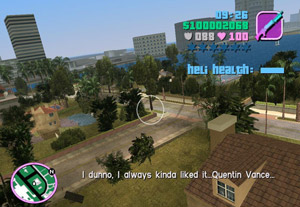 GTA Vice City set the story in 1986, taking on the role of Tommy Vercetti, a hitman who was released from a Liberty City prison. The storyline was inspired by films like Scarface, and TV shows like Miami Vice, parodying the culture of 1980s. The gameplay and design stayed close to GTA III, adding the ability to fly vehicles, as well as buy property.

GTA: San Andreas which was released in October of 2004 took the improvements from GTA Vice City to the next level. The story here takes place in 1992, with the games main protagonist, CJ Johnson returning to his home in Los Santos for his mother’s funeral. His family and gang in need of help, CJ steps in to bring the power of the Grove Street families back to Los Santos. Unlike the previous releases, there were no load times while in transit, and the only loading was seen when entering buildings, and for cut-scenes.

GTA: San Andreas also added many RPG features. Clothing and accessories, haircuts, tattoos, as well as the need for the character to eat healthy and workout (the effect of not doing would turn your character into an obese gangster). Also for the first time, characters could climb walls, and swim. Also a fun gameplay addition was gang wars. When rival gangs were attacked, a territory war would begin.

Though the game had been controversial since the beginning, GTA: San Andreas and Rockstar suffered a lot of bad publicity when a mod was released that allowed players to unlock an unfinished mini-game which involved CJ the main character having sexual intercourse with his girlfriend. Though this was only accessible by changing the code in the game, Take-Two was served a class action lawsuit.

Despite the advances in the games following the first 3D Grand Theft Auto, GTA IV is titled as such because it represents another leap forward in technology much like the first. Using RAGE (Rockstar Advanced Game Engine), and engine first seen in Rockstar’s ‘Table Tennis,’ GTA IV is a game unlike any other. With detail beyond belief, the game features a realistically rendered city based on the boroughs of New York City.

You now play as Niko Bellic, a Serbian immigrant who comes to Liberty City to pursue American dream. He meets his cousin Roman Bellic, an owner of a taxi company. Niko arrives to a violent city set in a modern time period. 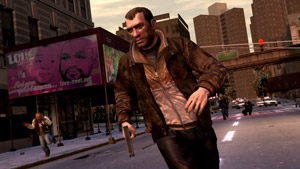 Introducing a cover system, and new gameplay features like a fully working cell phone, Rockstar proves once again its ability to innovate a genre that has seen so many cheap imitations.

The Grand Theft Auto series built an entire genre, changing the face of gaming, so much that traditional games have taken its model and brought it into their own style of gameplay (Mario Galaxies anyone?). I could probably talk about the game for days, but unfortunately, I’m only 20% into GTA IV, so, duty calls.