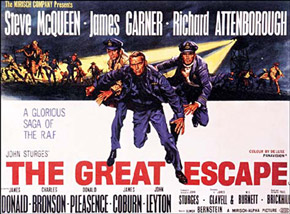 You’re probably looking at the title wondering just what in the hell I’m thinking. World war as fun? Millions of dead people as entertainment? Not possible. In fact, a rather sick premise. However, please, hear me out. The 1961 release of ‘The Guns of Navarone’ was a landmark World War II movie. It was about the countries involved in the war, but didn’t acknowledge the horrific actions of the Nazis. It was more interested in using the war as a backdrop for an action movie. World War II as escapism. The following movies also fall under that heading. See? Fun in World War II movies. Like ‘Hogan’s Heroes,’ but on a bigger screen.The Great Escape
Sure, ‘The Great Escape,’ is based on true events, but a few things were changed. Like the nationalities of every main character. Oh and the ending. Other than that- completely true movie. Might as well be a biography. For me, this is the Steve McQueen movie. Irrepressible, individualistic and daring. All of these traits are part of the McQueen persona, all on display here. The movie also stars James Garner, Charles Bronson and Donald Pleasance. If you’re looking for a good movie to get lost in for three hours, check out ‘The Great Escape.’

The Dirty Dozen
Lee Marvin and twelve of his closest friends work to kill Nazi officers on the eve of D-Day. (I know what you’re thinking, ‘Lee Marvin plus twelve people is thirteen. But nobody’s going to see a movie called ‘The Dirty Baker’s Dozen.’) John Wayne was originally cast in the leading role, but passed to go make ‘The Green Berets,’ possibly the worst Vietnam movie ever made. 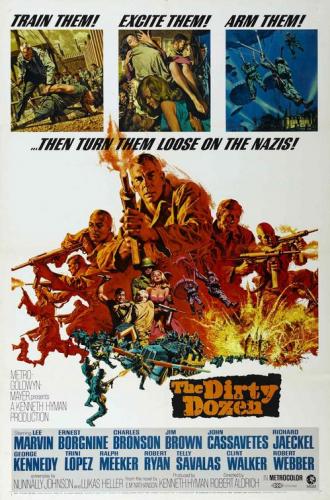 Marvin’s group is made up of what could be nicely called problem children. Each of the dozen have either been sentenced to death or life in prison for their crimes. However, they’re offered a pardon in exchange in taking part in the attack. Needless to say, it’s an awesome attack. I mean, Jim Brown killing Nazis? Charles Bronson killing Nazis? Pop the corn, it’s going to be a fun night.

The Train
Again, another World War II movie that has so few ties to the actual story they based it on. Burt Lancaster is a leader in the French resistance. (‘Does he do a French accent?’ You’re thinking. Nope. Doesn’t even try.) After learning that a train loaded with some of Europe’s greatest art masterpieces is headed to Berlin in the final days of the war, Lancaster and his group must keep the train from reaching Berlin as the allies attack the city. However, they can’t not let the train leave. So, they need to make the Nazis onboard the train believe they’re heading towards Berlin without actually doing it. ‘The Train,’ is an excellent and thrilling movie. It takes its subject incredibly seriously and has some great moments of suspense. ‘The Train,’ is a lesser-known movie and really deserves a look. -Sam