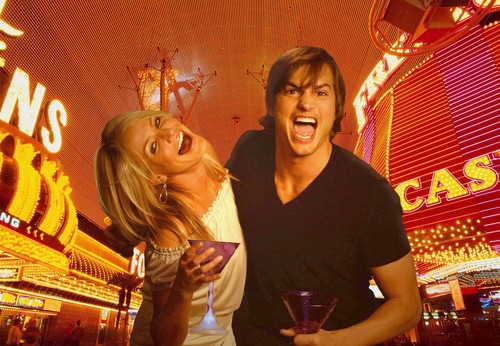 In defense of my manhood, I wanted to hate it, I honestly did. But I didn’t. Call it a soft spot, or an understanding of its intended audience. What you have here is a silly unoriginal comedy that is a decent date movie to compete with the crowded not-quite-date-friendly summer-fare.

The film opens introducing Jack Fuller (Ashton Kutcher) and Joy McNally (Cameron Diaz) both about to undergo a change in their life. Jack, gets canned from his Father’s furniture making shop, and Joy gets dumped by her far-to-serious business man fiancée (during a surprise birthday party no less). Both are advised by their friends to take a break and cut lose in the city of sin, you guessed it, Las Vegas.

The two groups are accidentally placed in the same room, after working that out, they decide to share one drink. Next morning, Joy wakes up in bed with a wedding band with two-dice on it. Both agreeing about their foolishness in the evening, Jack takes a quarter that Joy has left on a slot machine, and pulls the one-armed bandit for a 3 million dollar jackpot.

The infamous “What’s mine is yours,” comes to play here, with the pair of newlyweds fighting over splitting the jackpot. The judge (a cameo by Dennis Miller), doesn’t make it easy for them, sentencing the couple to “6 month hard marriage.”

Rob Corddry was entertaining throughout as Jack’s best friend and lawyer. There wasn’t much that was original or unpredictable here. A few funny back and forth’s throughout. I will say the dialogue at the very end was cheesier then a stuffed crust pizza.

Does the film garner a theater viewing? Absolutely not, totally a wait for rental/cable. Call it my mood, call it whatever you’d like, the film will fade into the forgotten pile of romantic comedies in just a few months, but it wasn’t terrible. So, if your significant other is looking for a diversion that doesn’t involve an iron suit, a racing car, or based on a C.S. Lewis book, perhaps you’d like to see what happens in Vegas.

2 thoughts on “Review: What Happens in Vegas”