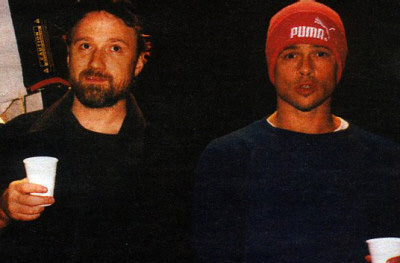 Sometimes pure movie magic happens when a director and an actor team up. The results are so good that you look forward to seeing the pairing again. These aren’t necessarily muses in the traditional sense, but rather bonds formed over great synergy, a great understand of how to work with one another or a great fun of making movies that comes across to the audience in the final cut of the film. Those moments when a film ends and you think, “Man, I’d love to see those two together again.” I’ll throw in my traditional disclaimer and note that this is by far an incomplete list, but here are a few of my picks for director/actor duos that I look forward to.

David Fincher/Brad Pitt – Some people questioned Pitt’s acting ability, saying his looks carried him versus any talent (although they’d probably have to take that lack of talent claim back now that Pitt seems to be in the renaissance of his career). However, his pretty-boy image was shattered when he first teamed up with notably meticulous director David Fincher in the film ‘Se7en.’ The pair went on to work together again in the film adaptation of ‘Fight Club’ (where Pitt both exemplified and destroyed his pretty boy image) and will be seen together again in ‘The Curious Case of Benjamin Button.’ This team-up helped move Pitt into the acting A-list as well as let Fincher move away from the head-shaking sadness that was ‘Alien 3.’

Quentin Tarantino/Samuel L. Jackson – Few can argue against the idea that this could quite possibly be the best cinematic pairing of director and actor ever. Seriously. Ever. With ‘Pulp Fiction,’ Tarantino’s dialogue was so perfectly executed by that the two almost seemed to share some sort of kick-ass verbal brain. Tarantino’s words danced off of ’s lips with such grace and attitude that it actually shifted ’s career towards being a bad ass in every movie since ‘Pulp Fiction.’ And from that point on, every time Tarantino put a film out, viewers salivated at the idea that would be involved. His turn in ‘Jackie Brown’ was inspired and his cameo in ‘Kill Bill: Volume 2’ was scene stealing thanks to the anticipation of his appearance in the film (and despite having maybe 2 lines).

Sam Raimi/Bruce Campbell – If you’ve been a faithful reader of this site, you’ll probably have noticed that I’m somewhat of a fan of Raimi and Campbell. But you have to admit that whenever these two team up you know it’s going to be fun to watch. From the awesomeness of the Evil Dead trilogy to ’s cameos in the Spider-man series, the pairing of this actor and director reminds you that movies are fun. In fact, one could easily argue that Bruce Campbell’s cameo in ‘Spider-man 3’ was really the only reason to watch that movie. I think what makes this pair work is that they share a sense of slapstick and humor that clearly comes across on the screen. It’s that kind of

synergy that is hard to come by sometimes and these two seem to have it in spades.

Robert Rodriguez/Antonio Banderas – Not only is this an awesome pairing, but really, in my humble opinion, it’s the only reason to watch Antonio Banderas. I mean, ‘Desperado’ and ‘Once Upon a Time in ’ were so kick ass and bad ass that Banderas became a star and Rodriguez got the spotlight he deserved as a director. Not to mention the fact that their vignette in ‘Four Rooms’ was one of only two reasons to actually watch that movie. Banderas’s cool, calm Mariachi plays even cooler amidst the kinetic frenzy of Rodriguez’s directorial styling, which is a big reason that these two work so well together; they balance one another out well. Definitely a bad ass pairing.

George Lucas/Harrison Ford – This one is sort of cheating in that Lucas really only directed Harrison Ford twice (‘Star Wars: A New Hope’ and ‘American Graffiti’), but by now we all know how involved Lucas is as a producer, and dammit, this is my list, so I’m throwing them on here! From ‘American Graffiti’ to the Star Wars trilogy to the Indiana Jones soon-to-be Quadrilogy, these two seem to get one another as a team, which is pretty impressive given Lucas’s penchant for not knowing how to direct actors. So for Ford to step up and take these characters Lucas created, understand them, then make them iconic is the truest form of the director/actor synergy. Plus, every once and a while I just need a good excuse to give a shout out to Han Solo.