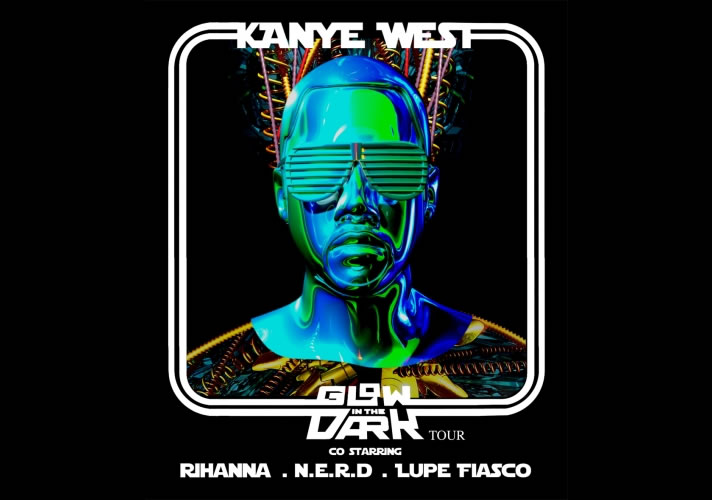 Expectation were high. Super high. Usually when I get this excited for something it never satisfies me. Like Hostess cupcakes, which talk a big game about being delicious, but never deliver. That is probably what made Kanye’s Glow in the Dark concert last night at the Tweeter Center that much more amazing. It didn’t disappoint. It was an all out assault on your senses for 4 plus hours. No wonder Mr. West is “by himself … so impressed.”

His hour plus set took on the narrative of a man traveling through space (aka traveling in a creative vacuum). During his journey he crashes and lands on an unknown planet. He spends the next hour attempting to get off the planet, trying to fix his ship “Jane,” which, it turns out, “ain’t nothing but a golddigger.” He tries to make a deal with God to get off the planet where he promises to straighten up his life and stop going crazy at award shows (leads into ‘Jesus Walks’). Finally he gets off the planet for his ‘Homecoming.’

Start to finish: crazy awesome. He had a very vulnerable moment with his tribute to his late mother and you got the feeling that he didn’t even notice the crowd at that point. The most intense entertainer I have ever seen. If you are not a fan of Kanye (and I am not sure you can rationally explain why you aren’t) then go see one of his shows. He gives you everything he has and then some. If he did not pass out from exhaustion at the end of the show then I am not the sexiest man in the history of everything. I cannot say enough about Kanye West, so I won’t even try to put it into words. Just picture a huge, flaming fireball of screaming awesome carrying glow sticks of super bright cool and you will only begin to get an idea of what I saw last night.

The concert started with Lupe Fiasco (I’m choosing my words carefully so as not to offend Bale, but Lupe is my musical man crush, there I said it). If you don’t have ‘The Cool’ go get it. Awesome album. Potent lyrics (It was odd to hear him do his song “Little Weapon” [a song about how children are used as weapons in various types of wars, ie soldiers in Africa] and see two kids in front of me singing along while being the exact age of kids with childhoods lost, being force to kill). Great beats. I want to be him.

N.E.R.D. very good set. Kept the crowd pumped. Their new album should be incredible. ‘Everybody Nose’ will be a hit, and give you something to think of every time you are out at a bar or club and see a line of girls go to the restroom.

Rihanna. I must say, a professional. She was able to ignore my constant demands for her to take me home, and my refusal to put my pants back on during her set. She was focused the entire time on not acknowledging me. She has transformed herself and is now one of the most dominating female entertainers out there. And she definitely knows how to wear latex body suits. Tip of the cap to you Rihanna.

One thought on “Concert Review: Kanye is Forever … And Now He ‘Glows in the Dark’”