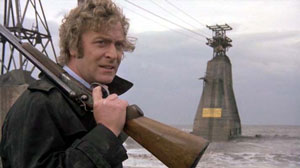 Mike Hodges’ 1971 masterpiece ‘Get Carter’ is an amazing piece of work. Slow and methodical, the movie is a two-hour slow burn, as you see Jack Carter, having his revenge upon those responsible for his brother’s death. The movie’s bleak and as a character, Michael Caine’s Carter somehow wins your sympathy and your support with very few redeemable qualities. The soundtrack is unique for an action movie, with jazz composer Roy Budd doing an outstanding job.

As the final minutes of ‘Get Carter,’ play out, there’s a feeling of inevitability, sad but true, and that the movie must end this way. And after it’s over, you can only stare at the screen, stunned by the movie you have just seen.

Now forget all of that and imagine a Sylvester Stallone movie. Now make it worse than you originally thought. Put John C. McGinley in as a not-all-that-threatening threatening mobster. Make the relationship between Carter’s brother’s widow and his niece kinda confusing and boring and you’ve got the 2000 remake of ‘Get Carter.’ (Oh, and make sure Mickey Rourke shows up somewhere.

Stallone confuses Caine’s silence and deadly gaze with not acting, so for much of the movie Stallone looks like he’s either try to move stuff with his mind, or pass something incredibly large and unwieldy. The mobsters are of the non-threatening threatening kind. You’re not scared or worried or mildly irked about what sort of havoc they seem to think they could wreck on Carter. There’s no threat, there’s no suspense and director Stephen Kay misread’s the original’s slow and methodical pace for boredom, so there’s a lot of jump cuts and strange edits to make you think that something of importance is happening when it isn’t. I almost found myself wishing I could just rewatch Neil LaBute’s ‘Wicker Man’ remake instead of finishing this. It’s terrible. Actually, it’s worse. It’s an insult to things that are terrible to call this movie terrible.

I know it’s a shopworn hue and cry, but, why do people continue to remake really good movies? Why not start out with something that doesn’t work and try to make it good? Maybe it’s because in addition to being unable to tell a story on their own, they also can’t see a good story when it’s there.