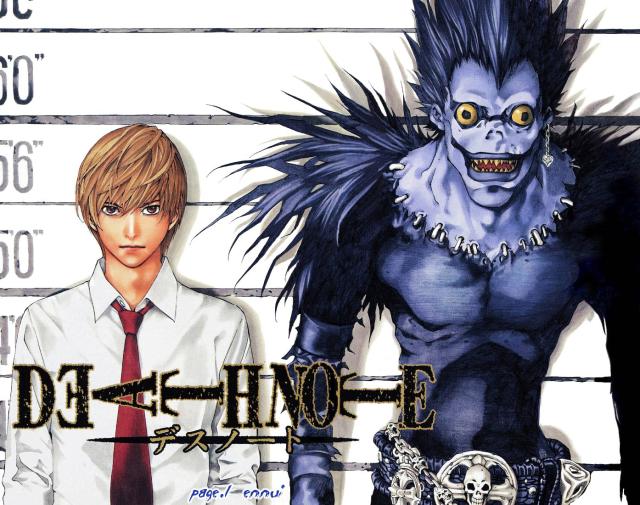 Based off of the popular manga and anime series by Tsugumi Ohba, “Death Note” was remade as a live action film in 2006. Viz Pictures dubbed it and brought it over seas for a limited run this month in theatres across the US.

Death Note is the story about a highly intelligent university student in Japan named Light who one day finds a rather odd notebook laying in the middle of the street with the words “death note” written on the cover. After reading a set of rules printed on the inside, he learns that it will supposedly kill anyone whose name is written in the book as long as you can also mentally picture their face. Naturally, thinking it’s a joke, Light takes the name of a criminal he had recently seen on the news and writes it in the book before going to bed for the night. In the morning, he wakes to find out that the criminal had died the night before due to a mysterious heart attack. Thus begins Lights quest to rid the world of evil by becoming judge, jury and executioner all in one; with only the mysterious (and also teenage genius) detective “L” to stand in his way. What follows is a very entertaining game of cat and mouse as L closes in on Light, whilst Light simultaneously invents new and clever ways to avoid detection.

The first thing I’d like to mention is that this was a dubbed showing. Unless it’s animated, in my opinion there’s really no excuse for not using the original language track and subtitling it. Dubbing live action just takes you out of the movie and were it not for the strong story distracting me from it, it would have bothered me quite a bit more than it already did. In addition to that, I’d like to send an additional “BOOOO!” out to Viz for not at the very least subbing the kanji that appeared in the numerous email/tv/phone texts that appeared on screen. While some of the time you can sort of infer what it should say, COME ON, you could have at least subbed that much.

Presentation choices aside, this really was a solid adaptation of the Death Note series. Having not read the manga but seen the anime, I can say that this basically covered roughly the first third of the whole story (there appears to be a second movie out there that covers the second third and concludes right before, where the anime seemed to jump the shark a bit, it’s third act). I was very happy that they included several of my favorite scenes from the anime, like the bus hijacking and the subway scene, in a very spot on faithful way; plus, even though they altered several other scenarios a bit, they still came across with similar meanings and end results for the most part. In addition, the castings were all pretty spot on as well, with each person looking and acting their individual part like a champ (or as best I could tell through the dub). I’d particularly like to give props to the design of Ryuuk—he was the only all CG created character in the film and the design/voice used was sufficiently creepy to bring the shinigami’s character to the big in the best way possible.

Overall, fans of the Death Note franchise have a lot to like here, while the casual viewer can certainly find something to enjoy as well with all of the various clever twists and turns present in Light and L’s game of catch me if you can.