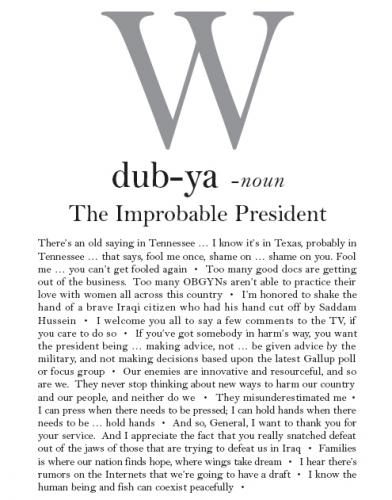 The teaser poster for Oliver Stone’s latest controversial project, ‘W,’ has been released.  The poster features some of the best known quotes from George W. Bush.  The film stars Josh Brolin as the President, and Elizabeth Banks as Laura Bush.  Thandie Newton plays Condoleezza Rice and Richard Dreyfus is playing Dick Cheney

The poster really doesn’t do much for me.  Plus, most of the quotes are so well known, it’s not surprising that these bon mots came falling from the mouth of the 43rd President of the United States.  That said, I’m intrigued by the movie’s premise, to say nothing of the race to get into theaters before the November election.  -Sam