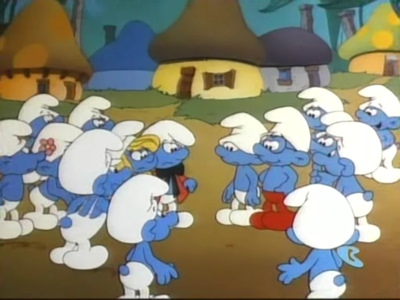 For one reason or another, I’ve never cared about the smurfs, which is why I can’t report the following news enthusiastically. Columbia Pictures and Sony Pictures Animation have greenlit a new hybrid live-action CGI (a la Alvin & the Chipmunks) Smurf feature.

That’s right folks, Papa Smurf, Smurfette, and all the other Smurfs will be smurfing their way to a cineplex near you.

David Stem and David Weiss who cowrote the second and third Shrek films are in negotiations to write the screenplay. The Smurfs first came out in 1958, and are best known in the US for the Hanna-Barbera cartoon. The TV series ran Saturday-mornings from 1981 to 1990.

I won’t deny that I’m sure the movie will do great for kids, but the Smurfs never did it for me. I think it was the rare occasion as a child that I’d change the channel when they came on. Well, at least it’ll bring the characters to a completely new generation of kids who just won’t get what the heck Smurfs are.