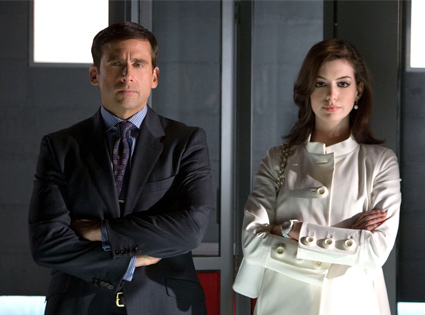 This is a hard one for me to review, because honestly, my initial reaction was to speak poorly of the film. I didn’t grow up watching ‘Get Smart,’ I’m only slightly familiar with the original series, and I think the only episode I saw was the last 10 minutes of an episode when I was 8 years old. So, for that reason, I’ll try to refrain from being too harsh.

‘Get Smart’ is an adaptation of the 60s spy television show from Mel Brooks and Buck Henry. The film stars funny man Steve Carell as Maxwell Smart, Anne Hathaway as Agent 99, and Alan Arkin as the Chief of the secret spy organization, CONTROL.

After KAOS (the arch enemy organization lead by the evil Siegfried, played by an always menacing Terence Stamp) penetrates and attacks CONTROL’s headquarters, Maxwell Smart is promoted to field agent, and sets out with Agent 99 to find KAOS. Dwayne Johnson stars as Agent 23, who is doing the opposite of Maxwell Smart, and retiring from the field.

The film, despite starring the ordinarily funny Steve Carell lacks in the funny. Though, when it is funny, it hits on all cylinders. Between these laughs, I found myself glancing at my watch, as the “mystery” didn’t have me very engaged.

What could have made it better? From what I know, the original ‘Get Smart’ was funny, but not quite a barrel full of laughs. This one can be described similarly, but I do hope whatever Maxwell Smart was up to back then, was more interesting then what he’s up to now. The movie was extremely formulaic, and predictable. Speaking to ‘Get Smart’ fans, there were a lot of references in the movie I didn’t pick up on till later (and some I did, the “Cone of Silence,” and the “Shoe Phone,” both make appearances), and it was that nostalgia that apparently helped the fans enjoy it. I unfortunately, didn’t have that to fall back on. I always try to find redeeming qualities in everything, because everything has some entertainment value. Honestly, I may have been better off just watching the trailer a few more times, or waiting for it to come on cable.