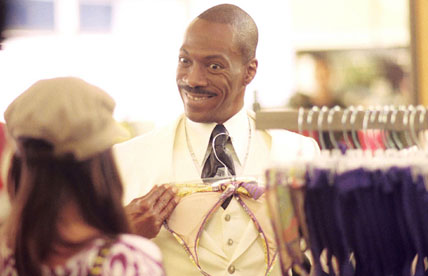 There was a time where Eddie Murphy was hot. Arguably among the comic greats, his films were funny and entertaining. Now, he is taking his place among other performers who were once great, Murphy may have never been a De Niro or Pacino, but nevertheless, he was fun to watch. So, in this new recurring feature, and because of a new entry into Eddie Murphy’s pile of crap movies, I’ve decided to say, Eddie Murphy, WTF.

One may ask, where did you start to take a turn for the worst Mr. Murphy? I’d say it’d have to be ‘Beverly Hills Cop III.’ Since then, he’s had a few films that I enjoyed (‘Bowfinger,’ was fun, the kids love ‘Dr. Doolitle,’ and ‘Daddy Day Care.’), but I’m not here to talk about those. I’m here to talk about the one’s that made me shake my head and cry out, Eddie Murphy fire your manager and agent!

In this crapfest you start with another actor whose gone south, Robert De Niro. ‘Showtime’ was a buddy cop spoof, two very different cops end up starring in a new reality-TV show while investigating a crime. Hilarity ensues, as Murphy’s character Sellars, butts heads with his polar opposite played by De Niro. The movie was not funny, the action was terrible, to say nothing of the acting. The film flopped. No big surprise there. 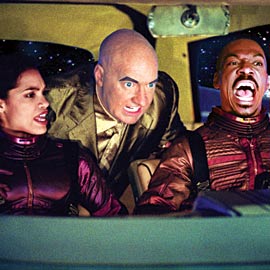 You were lucky enough to earn the distinction to release more then one bad movie that year Eddie. In this “film,” you embark with your buddies investigating who burned down your night club, only to (spoiler alert) that the perp. might have been you!  The film received 5 nominations, though not from the Academy. The 5 nominations came from the Razzie Awards, for worst actor, worst director, worst picture, worst screen couple, and worst screenplay.

You’d think two crappy movies in the same year would have been enough, but, we all know about the rule of threes. You starred with Owen Wilson in the big screen send up of the 60s TV series ‘I Spy.’ In it, you and Wilson sought to find a stolen protype stealth fighter, your mission (which you chose to accept) was to use hilarious hijinks to bring the arms dealers to justice. Netflix this one, trust me (/sarcasm).

So, they made a blockbuster out of the ‘Pirates of the Carribean’ ride, they can do it again with the Haunted Mansion…right? Wrong. This time you played Jim Evers, a work-a-holic who learns family values from a ghost in a haunted mansion. I wish a ghost had taught you artistic credibility.

Sometimes, even irony can be found in a films tagline. “Have you ever made a really big mistake?” Someone has a sense of humor, it wasn’t the writer of this movie…oh…Eddie, you were one of the writers. Awkward.

So there you have it, perhaps the blame of the demise of his own career can’t really be placed at the foot of his agent, or manager, or studio, but really, Eddie Murphy is destroying Eddie Murphy.

I’ve left out plenty of missteps for your readers to talk about in the comments, have at it, and, if you’ve got the gall to defend, I welcome debate.