While I don’t consider myself a sci-fi enthusiast (and definitely don’t fall into the charming category of “geek”), I can say that when a sci-fi movie is good, I mean really, really good, I’m all over it. Sci-fi films have an excellent way of dissecting our culture, discussing our darker sides and, if done right, transcend the pitfalls and assumptions about its genre to provide some pretty intriguing insight in ourselves. So I’m sad to say that I’ve gone over 28 years without seeing what most consider to be one of the all-time sci-fi classics. I refer to Ridley Scott’s 1982 film, ‘Blade Runner.’

Now, being a novice to this film, I’m not sure that I watched what most fans consider the “definitive” version. So my commentary is on ‘Blade Runner: The Final Cut.’ The film follows Rick Deckard, played by Harrison Ford during a time where he actually cared about acting well, who is what the police refer to as a Blade Runner. He is authorized to kill escaped Replicants, which are humanoids built for servitude. Replicants are designed to look and act exactly like humans and by the time the Nexus-6 series of them are released, have memories built in so that they often don’t even know they’re Replicants. Deckard and the other Blade Runners can administer a test, which is a series of questions to gauge emotional response, to determine if the subject is a Replicant. Deckard is pulled out of retirement to find and “retire” four escaped Replicants. The film follows Deckard as he chases them down and even falls in love with one.

‘Blade Runner’ is based off of a novel by Philip K. Dick, so given that, you already know that the story is going to be an intense sci-fi epic filled with moral questions. And Scott’s picture does a decent job tackling these questions. The film touches on the idea that because these humanoids have memories built in and think they feel emotion, could they actually be more than just robots? Does the emotion you get from a memory become more justified and define you because it actually happened? Because the Replicants feel this too, they just didn’t actually have the experience. In true Dick fashion, the questions are left ambiguous and left to the viewer. Unfortunately, the film doesn’t delve too deeply into these metaphysical waters, instead only slightly dipping its toes into them. Had Scott and company pushed the film further into this territory, the film would probably have been perfect. But because it really didn’t, the story was only really good instead of excellent.

Instead, where the film really takes off and, in my opinion, what makes it a classic (because, now 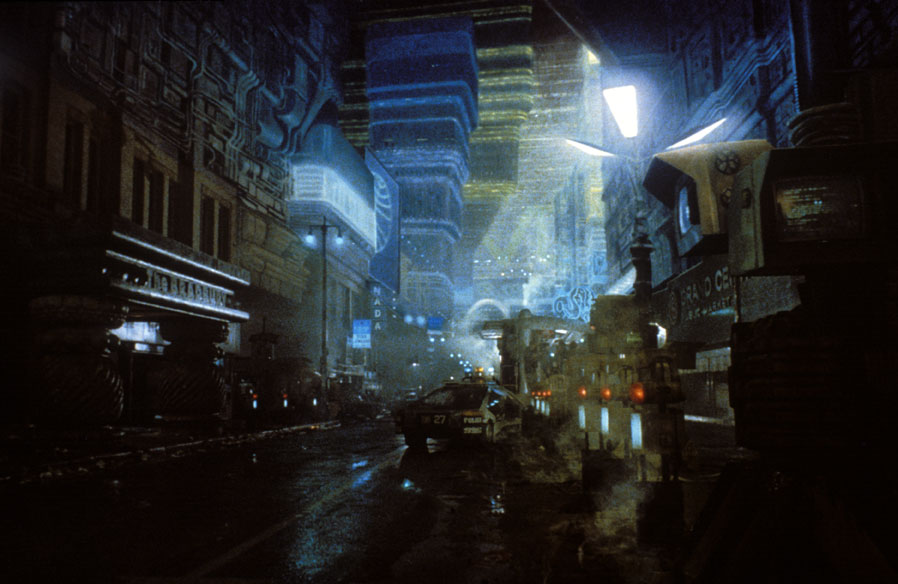 having seen the film, I can definitively say that I agree, it is a sci-fi classic), is Ridley Scott’s brilliant dystopia future-cop noir. This film is at the same time a cop drama and an excellent, modified version of film noir. The downtrodden, rainy, over-populated and stimulated world that Scott put together for ‘Blade Runner’ is actually breathtaking in its look and its realism (which is a large tip of the hat to the special effects, which are on the same level as the original ‘Star Wars’ trilogy). And with the future date of 2019 in which the world is set it, it’s surprisingly close to where we are now. Sure, there are no flying cars and we don’t ride elevators up the side of trapezoid buildings, but look at our populated cities and see how buildings and antennas and satellites reach higher and higher for the sky. Surprisingly, not too far off.

‘Blade Runner’ is definitely a classic film. Harrison Ford gives a great performance as a cop who’s called back into duty one more time. M. Emmett Walsh is great as the cop who pulls Decker back in. Sean Young is good as Rachael, the Replicant love interest. And, after watching this film, I’ve renewed my campaign to put Rutger Hauer in every movie. That guy is great to watch. ‘Blade Runner’ is a must-watch for anyone who knows and understands that sci-fi is more than aliens trying to take over Earth, for anyone who knows that the original Star Trek was about more than Kirk trying to get it on with some space ladies, for those who know that if you give the film a chance, you can actually see through futuristic sets and dressings and see something that’s pretty modern. If you’re like me and have gone this long without seeing ‘Blade Runner’, then follow my lead here and watch this movie.