I’m not sure if you’d technically classify this film as a remake or another adaptation, but Tim Burton’s ‘Charlie and the Chocolate Factory’ is a saccharine visual overdose. And it should be. The chocolate factory that Roald Dahl created back in 1964 is one of a sugary wonderland filled with sweet excess. And director Tim Burton’s twisted gothic take on, well, everything, meshes well with the dizzying wonderland of chocolate waterfalls and edible grass.

The film follows Charlie Bucket, the son of an out-of-work father (he was replaced on a toothpaste capping assembly line by a machine, thanks to the rise in chocolate consumption), who lives with his extended family including Grampa Joe, who used to work in Wonka’s factory. To say the Buckets are poor would be like calling the Pope “kind of religious.” Their house is a shanty that has a lean that would make Pisa’s tower jealous. Charlie’s bed is in the attic and he is able to overlook the city because, well, there are huge holes in the roof. Charlie cityscape view is summed up by Wonka’s mysterious factory, which, despite being closed down for years and years, still produces chocolate. One day, the world finds notes posted from Wonka himself stating that 5 golden tickets have been sent out in the latest batch of Wonka Bars and those 5 who have the tickets will be given a tour of Wonka’s mysterious factory by the man himself, Willy Wonka. Tickets are obtained and the adventure begins.

Those who cried “sacrilege!” at the prospect of remaking the 1971 Gene Wilder classic ‘Willy Wonka and the Chocolate Factory’ needn’t fear; this film is pretty different from Mel Stuart’s 1971 film. The biggest difference is the translation of Willy Wonka himself. While Wilder’s Wonka (say that five times fast) had an agenda, he was mostly warm and compassionate to those who deserved it. This is not the case in Burton’s rendition. And that’s really where this whole film misses its mark. Johnny Depp’s portrayal of Willy Wonka feels, and this is just odd to write, too bizarre and undercooked in this film. Depp’s Wonka seems to have a weird sense of distrust of people (not totally weird, as Burton gives the character a back story to sort of explain it). This Wonka’s life is spent serving the creation of the world’s best candy. And as a result, we get a somewhat misanthropic but over the top cheery Willy Wonka and it feels out of place.

But that aside, ‘Charlie and the Chocolate Factory’ is a good take on the famous story. Danny Elfman’s music is a sugary as the scenery. There is nothing like watching 100 Deep Roy Oompa Loompas sing a song that would musically fit perfectly onto a Beck album or his seeming take on an evening with Spinal Tap. All the things you remember from the classic Dahl story are here: the glass elevator, Veruca Salt assaulted by squirrels, Agustus Galoop’s trip up the chocolate tube and the rest of the misery brought on by the children’s greed in the decadent factory, each followed by a song that highlight’s the incident. Everything in the film looks like a Burton take on Dahl’s world. And that alone makes the film an interesting watch (despite what you think of his films, you have to admit that Burton knows how to create sets and a look for his films).

The second real reason to watch the film is Freddie Highmore.
Highmore, as Charlie Bucket, has an intense sincerity and earnestness that seems to come so naturally to the young actor. He was incredibly impressive in his first outing with 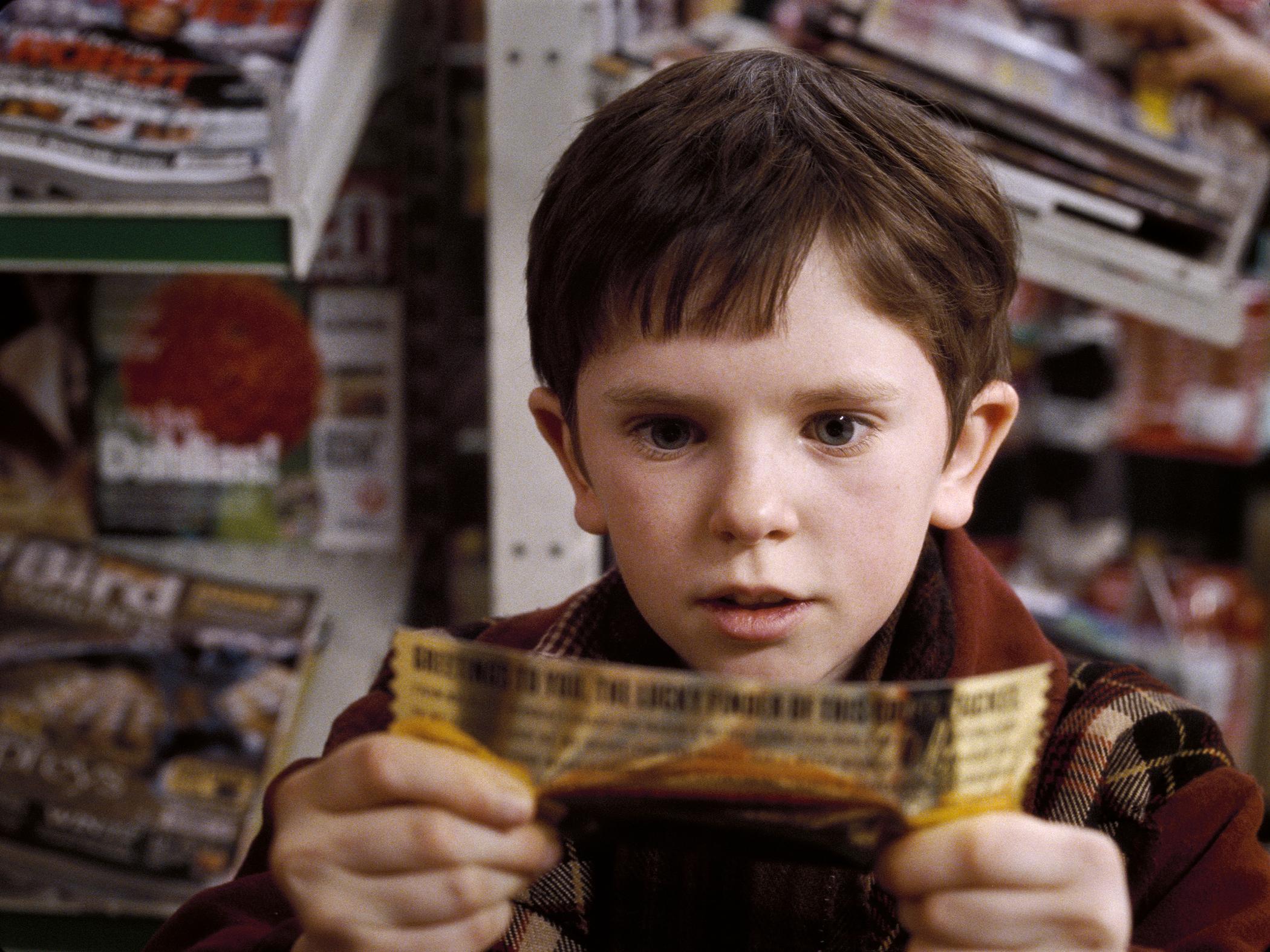 Johnny Depp, ‘Finding Neverland’ and he continues to impress in this film. His Charlie is the heart and soul of the film and watching Highmore work, you buy it hook, line and sinker. While Depp’s performance seems like a misstep, Highmore’s performance more than makes up for it. ‘Charlie and the Chocolate Factory’ is much like its content: it’s sweet and sugary and fun while you’re eating it, but once you’re done you’re looking something more substantial to fill you up.

One thought on “Justin Reviews: Charlie and the Chocolate Factory”