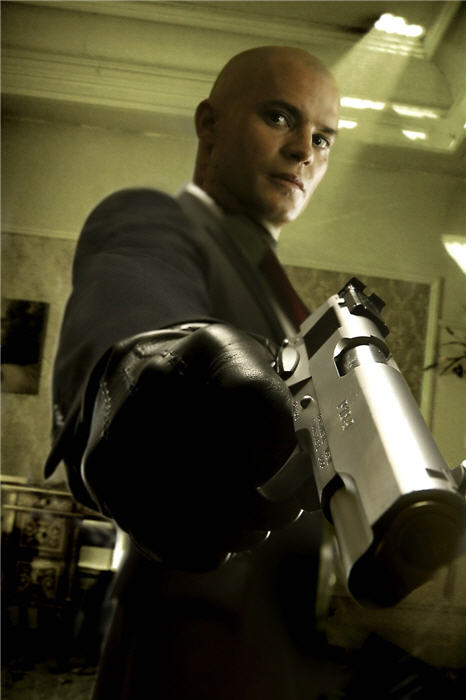 There is nothing wrong with a movie whose sole purpose is to explode things in a dramatic fashion. However, Xavier Gens’ movie ‘Hitman,’ takes things to a rather unreasonable extreme.

Based on a video game, (and adding fuel to the ‘there’s never been a good movie based on a video game fire,’) ‘Hitman,’ tells the story of Agent 47, a contract killer with a shaved head and a barcode at the base of his scalp. He’s incredibly efficient and clean- when he kills you nobody knows who did it. Things begin to go awry when he tried to kill the Russian President. Of course he does it, but there’s a problem. He really isn’t the Russian President. There’s something about arterial blood spray that gets Interpol involved in the case. Agent 47 is then sent to kill the one person who knows the truth about the Russian President. When 47 sees it’s an attractive Russian hooker, he doesn’t go through with the job and quickly finds out that someone is out to kill him. His agency double-crossing him, 47 hits the road with the girl, trying to figure out the truth before one of the many people who want him dead get their wish.

Did you follow all that? That’s what I was able to piece together from an actual viewing of the movie, combined with reading the plot summaries on two different web-sites. Needless to say, a clear plot was not one of the goals of the filmmakers.

‘Hitman,’ is a celebration of style, flashy cutting, cool lighting and effects. Agent 47, as played by Timothy Olyphant is, of course, an enigma. He finds himself falling for the Russian hooker, but doesn’t give in to his desires, fearing, I guess, that it’ll make him weak. Basically, the problem with a movie featuring a un-emotive main character is that you have no idea what the hell he’s thinking. Sure everything looks cool, but it’s all too contrived. Of course he’d stash a gun in the perfect place to retrieve it in the heat of a fight. Of course he would have an escape plan all set if someone comes to his hotel room. What happens to housekeeping when they just want to turn down the bed?

While some movies are silly and fun, this is just plain silly. It’s too caught up in looking cool and acting like it doesn’t care that the attitude starts to rub off on the audience. If Agent 47 doesn’t seem to give a crap, why should we? -Sam