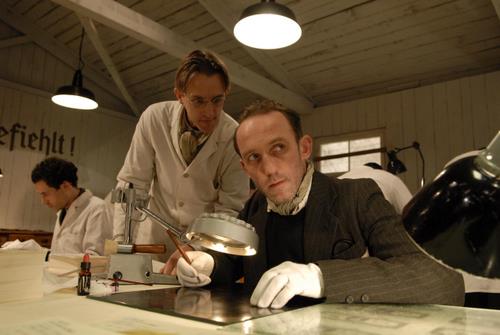 When the Oscars were handed out earlier this year, one of the surprise winners was in the Best Foreign Film category. ‘The Counterfeiters’ became the first Austrian movie to take home the top honor.

The movie is based on the true story of a group of Jewish prisoners at the Sachsenhausen concentration camp, who are put to work, forging the British pound and the American dollar. They are experts from a wide array of fields, from finance to forgery. The at-first-unwilling head of the group is Salomon Sorowitsch, an expert counterfeiter.

When the movie opens, Sally, as he is known, is using his skills to fake a passport for a beautiful woman so that she can get out of Germany. However things take a turn for the worse when the SS break down his door and ship him off to a camp.

Sally, however, is lucky.  One of the guards recognize his talent, and he is suddenly painting portraits of the families of the various administrators of the camp prisoner’s misery. Sally keeps moving upwards, from camp to camp, before his true talent is recognized and he is put into the room with the others working on forging currency. The plan is to flood the market with money, creating an unstable economy. Sally doesn’t want to help the Germans, but he has little choice.

‘The Counterfeiters,’ is an almost-ran movie. The plot is decent, the true story is amazing and yet, the production lets it just lay there. There is no suspense, some drama and no surprise. It’s difficult to understand. How can such a compelling story not work? The acting is good, the photography is good. I think what it comes down to is a poor script. Sally is a quiet character and as such, it’s hard to get inside his head and see what he’s worried about. There are a few people in the camp that he wants to save, but it’s hard to understand why, especially since the movie opens in the future, where Sally is all alone.

‘The Counterfeiters,’ blew it. Which is a shame. The story is so good. Too bad the movie didn’t do it the justice it deserves. -Sam