Horror movies with goofy, wild and crazy premises aren’t unknown the the world. There’s been plenty, from killer clowns, to killer toys. Some take themselves seriously, some, realize their nature and take the black comedy route, ‘Teeth’ can be lumped in this category.

The film is about a young woman named Dawn (played by the wonderful Jess Weixler) who is an advocate for abstinence. Dawn makes a new friend, Tobey (Hale Appleman), who awakes a feeling which feels wrong for Dawn, a feeling of lust, and love.

It’s not till later, when Dawn experiences a horrible rape, when she realize, something is different, “down there.” Dawn has vagina dentata, teeth in her vagina.

The films themes range from feminism, the educational system and its views on gender, abstinence, Christianity, and evolution. The movie isn’t scary (well, maybe a little scary for the men in the audience). Anytime the viewer finds themselves confused, the music cues are there to remind you, hey, this is supposed to be funny. Mitchell Lichtenstein wrote and directed a very funny entertaining film, which had its premier at the 2007 Sundance Film Festival. 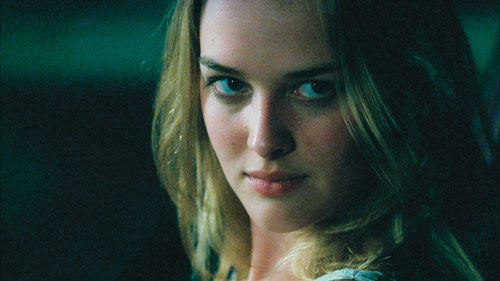 At barely 90 minutes, the film flies very fast, and the performances found within are excellent, and Jess Weixler carries the film strongly, a lesser actor could easily ruined the film by making it too cheesy, but Weixler excels with her balance.

The movie is not for everyone, and can be graphic at times, but I promise, after watching the trailer, and reading this review, rent it, but, put the kids to bed before popping this one in.