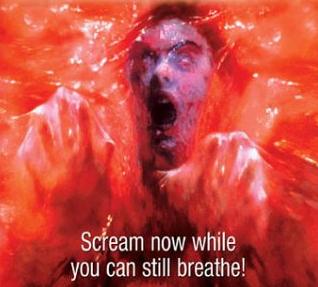 Editor’s note: The BFI recently asked a group of writers and filmmakers to submit their ideas for a great double bill. In the spirit of playing along, the editors of Lonely Reviewer have asked their contributors to do the same. There were no rules other than asking for a submission. Each writer compiled their own two films using their own criterion and rules.

Give some of these double bills a shot one night and let us know how it goes. Or, submit your own suggestions below. Consider this our way of taking you out to the movies. (We’re not paying for the popcorn, though.)

When it comes to horror movies for me, I can be very specific. There needs to be at least 3 things within the movie for me to actually enjoy it.

1. Humor. I’m not talking about jokes, etc. What I mean is that there needs to be dialog or action within the film that is sort of meat to be serious but comes off as totally ridiculous or random. That is a key element in great shitty horror movies, there needs to be random, unintended comedy.
2. Gore. It doesn’t even really need to be actually gory, as in High Tension gorey, but it needs to at least try. Usually the worse FX, the better. Now, I don’t mean CGI blood and guts…no, what I mean is the great old fashioned gore FX, back when you needed talent to make a stab wound or a decapitation actually look as real as can be. Sometimes just the effort is good enough.

So this brings me to my double bill. Both these movies have all three of these key elements and that makes up for a fan-fucking-tastic night of gross out horror!

There are really only a handful of remakes that actually far surpass the originals. The Blob from 1988 is one of them. This movie is belly laughable on so many great levels. Never does this film stop being entertaining, and it contains some fucking kick ASS 80s FX. Just wait for when the kid gets the blob dropped on him from the ceiling, and then it starts to dissolve his entire body, as he is reaching out to his girlfriend, jesus…its the stuff horror dreams are made of. And Kevin Dillon, the more ferret-looking brother of Matt Dillon, is the star. Hot off his big role in Platoon, he shines in this movie as small town renegade Brian Flagg and watch out cause this kid has a lip on him big enough for two mouths. The FX in this movie does cartwheels around some of the shitball CG FX of movies these days. It amazes me as technology advances, special FX just gets worse and worse, especially in horror. It takes massive amounts of talent and patience to use prosthetics and fake blood to make something look real, over just making CGI spurting blood. It’s so bad that I can barely watch modern horror. BRING BACK TRADITIONAL FX!

The amazing thing about The Blob remake is that it was written by Frank Darabont, who wrote and directed some amazing films such as The Shawshank Redemption and The Green Mile. His dialog is as entertaining as any I’ve ever heard. But like Society, the FX is the star of the show. Just wait for when the lady gets squashed by the blob in the phone booth, or when the blob pours out of a potential date rape victim…just breath-taking.

So there you have it. Watch these two movies on a rainy Saturday night with a bowl popcorn, because these are two comedy ridden gross out masterpieces that today’s movies just cannot compare to. It’s a double feature of epic proportions and also a glimpse into a dead art…the art of amazing and talented horror FX. Happy viewing! -Ben