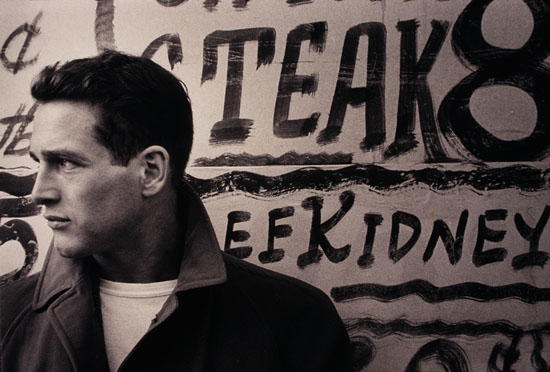 It’s a sad day today not just for film  lovers, but for the world in general.  Paul Newman has died at age 83.  It’s usually big news when a movie star dies, for I somehow feel that this is much more than that.  Paul Newman was not only one of the greatest actors of his or any generation, but he was also just a great human being.  The work that he did with his Newman’s Own line of food products has helped millions of kids.  He never kept a dime of profit for his food company.  He understood that he was wealthy enough from his film success that he wanted to give something back, and all the money he made from his food was donated to charity.  To me, that is an honorable person. When someone is as rich as a movie star, it’s rare to see them being anything but disgustingly selfish.  I loathe most actors because they think they are entitled to the life they lead, but they’re not.  Paul Newman was a different kind of star, and, well, I don’t think they make guys like him anymore.

With 9 Oscar nominations and 1 win, he was truly an acting icon.  Some of my favorite movies of all time starred Paul Newman.  The Hustler, Cool Hand Luke, Butch Cassidy And The Sundance Kid, The Color Of Money, Hud, The Hudsucker Proxy, The Sting, Slap Shot, Road To Perdition…geez, the list is so long, I can’t even type it.  I suppose that there are no words that I could write that would even do the legacy of this man justice…if you haven’t seen many Paul Newman films, I implore you to check them out.  You will not regret it.  His presence and humor were light years ahead of his acting rivals like Brando and Dean.  I think Newman way outshines Marlon Brando, whom Newman always called a spoiled brat.  Newman was one guy that never let fame go to his head; who could have had any woman on Earth, but remained faithfully married to Joanne Woodward for 40 years or so. When asked why he never cheated on her, his response was “Why go out for a hamburger when you have prime rib at home?”  What a class act!

It is a sad day for all, and I know that in honor of his passing, I will be having a Paul Newman festival for sure.  In an age when true heros are few and far between, it’s always a real life tragedy when one falls…today, a hero has fallen.