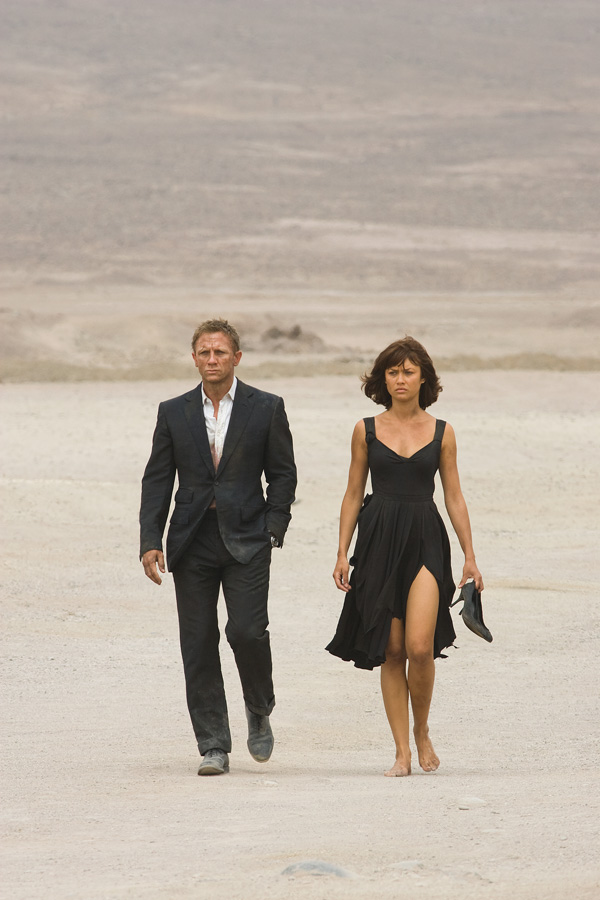 Hey fans, it’s me.  How’s it going?  I got a question for you: why are you here?  Why are you reading this?  Because you like movies.  Because you like to see what’s coming up and what you have to look forward to.  However, as great as the internet is for such things and as awesome as it is to see sneak peeks at things like costumes and script pages and music, I have one favor to ask you- don’t get all bent out of shape until you see the final product.

Yes, that’s right.  Jus mull over your opinion while you silently consider your feelings.  Don’t go hopping around posting on sites, loudly complaining and every little detail that you think filmmakers got ‘wrong.’

Why am I finally complaining now?  Well, the ‘Quantum of Solace,’ video and single was recently released and I’m already seeing it from Bond fans who think that the song ‘isn’t good enough for Bond,’ (which, considering this is the same franchise that made us sit through ‘Moonraker,’ is a silly comment,) or that Jack White’s voice isn’t right or a million different things.

I’d like to take you back a few years, when it was announced that Daniel Craig would be donning the tuxedo and the PPK next.  People were up in arms.  They were screaming and yelling.  Someone even created a website, craignotbond.com, which, apart from being none too inventive, was a bit over the top.  And then, a year later, when ‘Casino Royale,’ came out, everyone wanted to be the first to reassure and promise each other that is was as good as they had heard.  I didn’t see too many people apologizing for attempting to tear Craig a new one the year prior.

What I’m saying is this; people remember the furvor, they don’t remember the retraction.  Is ‘Another Way to Die,’ any great shakes?  It’s alright, and the video kinda sucks, but all Bond videos kinda suck.  (Why someone doesn’t get more inventive than putting the musician in a gunbarrel, I don’t know.)  I’m waiting for the actual movie.  You remember that, don’t you?  That’s the thing that the song was actually written for.  If it doesn’t work there, well then we’ll have a discussion.  Before that, we’re just kinda yelling about nothing.  And what’s the point in doing that?

You can say, I don’t know if this is right, or even, I don’t like this, but please, make sure you make the disclaimer that you need to wait to see the movie.  I mean, that’s why we’re so into this stuff, yes?  I guess what I’m asking is that people be reasonable.  (Not that I see that happening anytime soon.)  -Sam