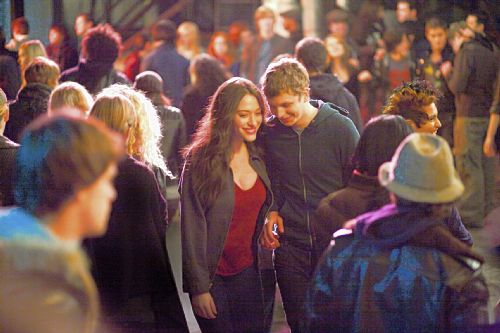 ‘Nick and Norah’s Infinite Playlist’ is an adorable film from director Peter Sollett (Raising Victor Vargas) and screenwriter Lorene Scafaria, based on the novel by Rachel Cohn.

The film is about young musician Nick (Michael Cera) getting over his recent breakup with Tris (Alexis Dziena). While seeking closure, Nick has made a series of mix-CDs to spill his feelings to Tris, who promptly tosses them out. These mixes are picked up by Norah (Kat Dennings), who has fallen in love with Nick (having never met him) because of his “most amazing mixes.”

The story picks up as the group is heading into Manhattan to an indie band called Fluffy, who is playing a secret show somewhere in the city. Nick’s band, “The Jerk-Offs” play a show which Tris, Norah and friends attend. This is where Norah kisses Nick, in an effort to show that she has a “boyfriend,” unknowing that Nick is her rivals ex. The kiss ignites a relationship which continues through out the night.

What bothered me most about this, is how the film has been marketed. With its hand drawn titles, and marketing campaign, its clear the distributors are seeking the ‘Juno’ audience. ‘Juno’ was a film that tried much harder at being a mature film. ‘Nick and Norah’ on the other hand is a film that is definitely geared to the teen crowed, it wasn’t trying to be anything more. Its subject’s and dialogue are far more relatable to your average high school Junior then your 20 or 30 something. This isn’t necessarily a bad thing, but I couldn’t help thinking the whole time, I wish this movie had come out when I was in High School, because I think I’d be enjoying it much more

Michael Cera as always was delightful to watch, and I was rather surprised by Kat Dennings. I found Dennings to be a bit annoying in ’40 Year Old Virgin.’ She was adorable, and I sold me her infatuation with Cera’s character. I’m very scared for Cera as he outgrows the whole awkward teenager bit, but, I’m enjoying it while it lasts.

But don’t get me wrong, I did enjoy it. I enjoyed hearing the little New Yorker references, and it had an excellent sound track, but at the end of the day, this movie wasn’t for me. Though, I know there’s a lot of success for it. While leaving the theater, I overheard a fellow patron (certainly someone at least 6 years younger then me) exclaim “I thought it’d be good, I didn’t know it’d be THAT good!” And there you have it.