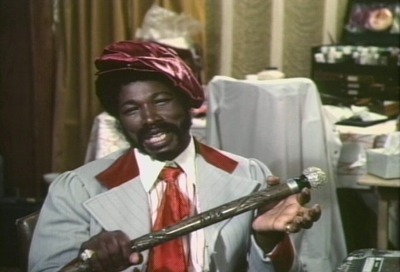 Comedian and actor Rudy Ray Moore has died at age 81, reportedly from complications due to diabetes.  Moore is best known for the character of Dolemite, and his films that are part of the blaxploitation genre.

Excerpts from Moore’s comedy records have appeared on hip-hop albums by such artists as Ice-T, Dr. Dre, Snoop Dogg, ODB, Busta Rhymes and Eazy E.  Moore later turned to cinema, appearing first in ‘Dolemite,’ based on one of his popular comedy ‘poems.’  The film, while lower than low budget, was a hit and followed up with ‘The Human Tornado,’ which was sometimes called ‘Dolemite II.’

The same year as ‘Tornado,’ Moore appeared in ‘The Monkey Hustle,’ opposite Yaphet Kotto.  This was the first film that Moore didn’t have a hand in producing, seeing as it was a little larger budget. As is always the way, a film designed for mass comsumer appeal, and starring a conterversial comedian of Moore’s ilk, leaves the viewer wishing things were a bit edgier.

Moore later appeared in ‘Petey Wheatstraw,’ and ‘Disco Godfather.’  Sadly, the more movies he made, the worse they got.  He continued to act and perform up until a few years ago.

While nobody will mistake Moore’s films for classics, there’s something wonderful about them that I always enjoy.  The excitement of ‘oh my God, we’re making a movie,’ is a feeling that is in every frame and makes them worth checking out.  He will be missed.  -Sam