Skip to content
home Movies, News Terrence Howard: Contracts…aren’t worth the paper they are on

Terrence Howard is pissed. Last week news outlets reported that actor Don Cheadle would be replacing Howard’s character Rhodey in the Iron Man sequel. Howard heard just like the rest of us, from the internet. 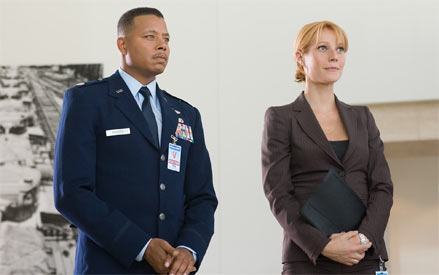 Howard told NPR that the news was the surprise of a lifetime, he read that it was about “money or something.” He told the public radio station that “Apparently the contracts that we write and sign aren’t worth the paper that they’re printed on, sometimes. Promises aren’t kept, and good faith negotiations aren’t always held up. Even friendships, people you support.”

When I first heard the news, I didn’t really think anything of it. I’d heard things here and there about Howard’s onset antics in the past, but nothing ridiculous. But, I wasn’t completely married to the character, I did think he did a good job, but, nothing life changing. If that is indeed how Paramount went about it though, I’m gonna have to side with Terrence on that one, that is just cold Paramount, just cold.