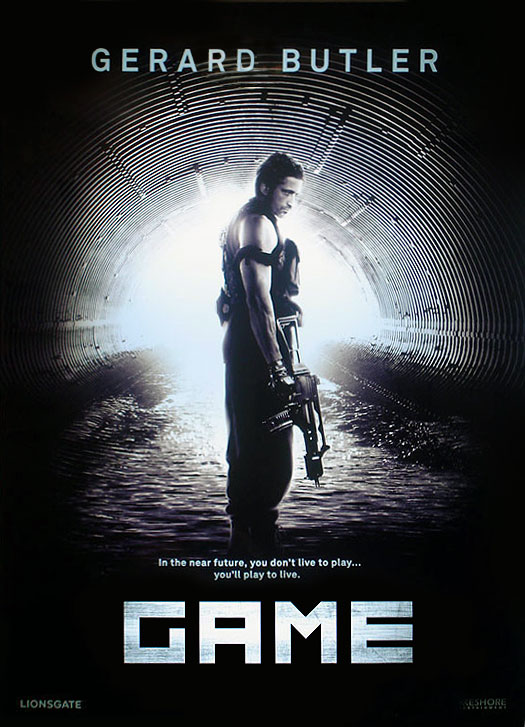 I recently had the opportunity to attend a test screening of “Game,” the latest film from Neveldine/Taylor, a.k.a. the directing duo that brought you “Crank” and the upcoming “Crank 2.” Judging by the audience reaction, this film is not going to be everyone’s cup of tea. That’s because it’s more like a cup of red bull and vodka. After an early onslaught of extreme violence and orgiastic debauchery, those looking for a typical action flick headed for the hills. Those who remained (95%), were treated to a mixture of grit and flash that dazzled its way into becoming an original and captivating genre pic.

Gerard Butler plays Kable, a man on death row who is given the opportunity to participated in a real-life video game in exchange for his freedom. Survive 30 battles of “Slayers” and you are set free. Problem is, the billionaire creator of “Slayers” (Michael C. Hall) isn’t going to let Kable survive. Kable must find a way to break out of the mind control video game, save his family, and regain his freedom. The acting in this film is very good. One particularly inspired scene, featuring a dance number and Michael C. Hall lip syncing to “Under My Skin,” really shows off the actor’s chops. Logan Lerman (3:10 to Yuma) is especially convincing as the young celebrity that controls Kable within the game.

The look of this film is consistently visually entertaining. The directors go back and forth between the gritty, muted world of “Slayers” and the hyper realistic, over saturated world of “Society.” Society is another mind control game where gamers control real-life people, making them flirt, drink, copulate, and do whatever it is people do when there are no repercussions. The set pieces in both worlds are rather remarkable.

This film isn’t perfect. The antagonist is somewhat absent when he should be raining down hard on our hero. Some viewers might also yearn for a greater emotional arc and less exposition. Granted, the characters probably could have been explored to a greater degree, but Game is not and was not intended to be a character study or serious drama. Game is, and is meant to be, a balls to the wall action flick with big guns and big explosions. As an added bonus, the film’s plot will leave you with a few questions about where the gaming world is going and how far is too far.

“Game” should be a hit amongst young men and especially amongst gamers. Unlike other gaming films (such as Halo), “Game” doesn’t pander to the gaming audience. Instead, “Game” concentrates on being a top notch action film that happens to be about gaming. In doing so, the film winds up being the most accurate incarnation of gaming that the film world has seen. Again, not everyone’s cup of red bull and vodka, but I’d certainly recommend this film.