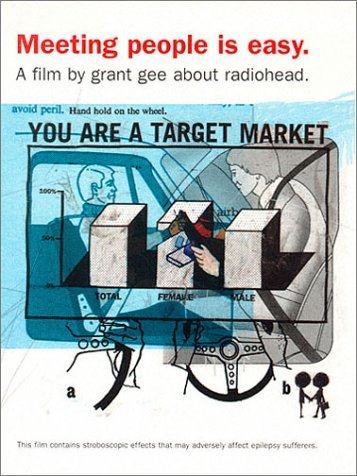 It’s a tired and worn-out tale, but it’s probably the truth: everyone who is not a rock star wants to be one and most rock stars spend a lot of time trying to just be another guy on the street.  There have been so many films over the years that continue to tell this tale that one thinks that, perhaps, like Mick Jagger once sang, it’s not all ‘lead guitars and movie stars.’

Radiohead, a band that has made a career dealing with alienation and feeling left out, joined the fray with their film ‘Meeting People is Easy,’ directed by Grant Gee.  Following the lead of the Rolling Stones film, ‘C***sucker Blues,’ ‘Meeting People,’ is a tour film, following the band as they wing their way around the world, supporting their first masterwork, ‘OK Computer.’

And like the Stones before them 25 years ago, Radiohead find the road a draining place to be, full of people who ask stupid questions and who want to be your best friend, and where you’re stuck playing ‘Karma Police’ and ‘Creep’ over and over and over.  Gee highlights the repetitive nature of a tour, filling the movie with shots of airport terminals and strange hallways, all of it becoming a blur, with the only break in the tedium being the time spent on stage.  And even then, a supertitle informs you of the city, date and show number of the concert.  Even if it is your first time hearing ‘Just’ in the film, the band’s played it 75 times before just on this tour.

There are two reactions one can have to such films as this, ones that continually cry ‘woe is me,’ over and over and over.  One is to simply shut down and ignore the complaints.  After all, it’s not going to change.  If it happened to Mick Jagger, you can bet it’s also going to happen to your band.  Or, you can study the band and see the treadmill they’re on.  And suddenly you start to feel for them.  What, at the beginning of the film was something to envy, you see the cracks and the imperfections in the job.  There are many shortcomings.  Some of my favorite are pointed out in interviews, cut so that the interviewer looks like a moron.  Gee then cuts to the article in print, so you can see how it reads on the page.  Inevitably, the band seems to be complaining that they’re so successful.

Shot on small video cameras as the band tours around the world and ending up at Radio City Music Hall, ‘Meeting People Is Easy,’ does give the impression about halfway through that it’s about to wear out its welcome.  However, it’s then that you get into a similar mindset of the band- It’s not a fun job.  And Radiohead don’t try to make it look fun.

If you are a fan of Radiohead, you simply must see ‘Meeting People is Easy.’  You will get a clear and first-hand account of what the band is like on the road.  If you’re intrigued by music and bands, like I am, the film is fascinating.  Everyone chases getting a hit song and then, just as quickly, they run away from it.  How can artists grow if they’re stuck playing ‘Creep’ every night for the rest of their life?

There is no new insight in ‘Meeting People,’ but that’s okay.  Some things don’t nicely work out to offer a message.  Not every sentence uttered by the band is gospel.  Don’t come here looking for easy answers or fun.  There’s none of that to go around.  -Sam