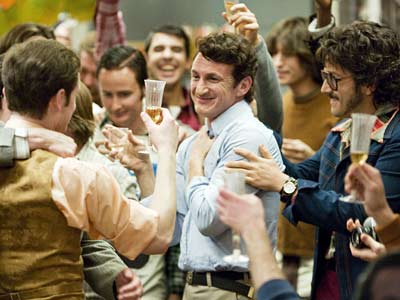 ‘My name is Harvey Milk and I’m here to recruit you.’

That’s how politician Harvey Milk began almost all of his speeches.  And even though he died 30 years ago, both he and his story is still recruiting people.  Recruiting people to stand up for what they believe in and to not be afraid of who they are.  Milk was the first openly gay elected official in the United States.  And Gus Van Sant’s new movie shows the difficulty that such a thing poses both politically and personally.

Milk, who moved to San Francisco with his boyfriend after tiring of living a closeted life in New York, quickly found himself in the middle of a battle between the residents of the Castro Street neighborhood and police.  Not wanting to step down, Milk vowed to fight, figuring that the only way to fight those in charge was to become a person in charge.  He ended up running for city supervisor.  He also ended up being an inspiration to gays across the country, showing them that, if he can do it and live a life in the open and unabashedly, they should too.

Being a spokesman for a movement is not always easy.  Early on, Milk receives death threats and his long-time lover ends up leaving because he was too busy working on his platform and campaign than devoting time to their relationship.

If you don’t know how Harvey Milk’s story ends, I’m not going to tell you.  The film does hint at it in the opening frames, but, go see it for yourself.  This is one of the best movies of 2008.

First off, Sean Penn is unbelieveable as Milk.  The way he completely inhabits the character is truly astounding.  The same can be said for Emile Hirsch, Josh Brolin and James Franco, all of whom turn in amazing performances.  The movie ends with cards updating you on the lives of each character and when they transition from the picture of the actor to the video of the actual person, it’s shocking how right on target so many of the performances were.

The script is by first time writer Dustin Lance Black, who wrote the script of Milk’s story as a writer with no connections or representation.  He was simply moved and inspired by Harvey.  And that love and respect shows through with every scene.  It’s incredibly well-structured and, more amazingly, doesn’t feel like it’s preaching at you which is a trap the material could have easily fallen into

Gus Van Sant’s direction is also wonderful.  His approach to the material is matter-of-fact; he’s not looking to make a saint out of Harvey Milk, and such a movie could have easily been made.  Instead, he simply presents the story simply and honestly.  He incorporates actual news and home movie footage from various rallies and news sources seamlessly throughout the movie.  His camera work and framing is incredibly impressive and is, at the very best of times in the film, completely unnoticeable.

There are very few, if any, movies that I walk out of and am ready to turn right around and go back in to see.  ‘Milk’ is one of those types of film.  Do not miss this.  You will not be disappointed.  -Sam