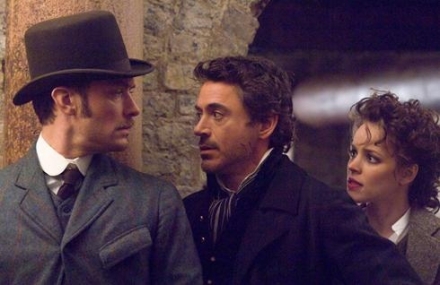 USA Today has published the first picture of Rachel McAdams as Irene Adler in Guy Ritchie’s Sherlock Holmes movie.  Of course, the movie also stars Jude Law as Dr. Watson and Robert Downey Jr. as Holmes.  The Adler character first made her appearance in the Holmes stories in “A Scandal in Bohemia,” but I’ve read that the movie will be a new Holmes adventure which alternatingly fills me with excitement and dread.  (I mean, Ritchie did unleash both “Swept Away” and “Revolver” on an unsuspecting public.)

No matter, the presence of Messrs. Downey Jr. and Law make me sleep a little easier at night.  -Sam