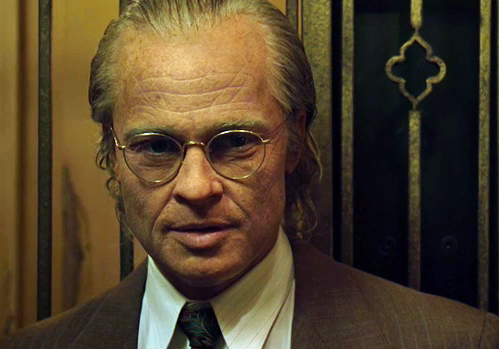 ‘The Curious Case of Benjamin Button,’ starring Brad Pitt and Cate Blanchett is a special film. It is a tale of a unique life, and the world through the eyes of the man who embodies that unique life. Directed by David Fincher and written by Eric Roth, ‘Benjamin Button,’ will no doubt bring Fincher much overdue focus this awards season, and deservedly so.

The film opens at the deathbed of Daisy (Cate Blanchett), on the day Hurricane Katrina is looming towards New Orleans. Daisy asks her daughter to go through her things and read her a diary, the diary of Benjamin Button.

The story begins with the birth of a child, but unlike most children, the appearance of this child is of a much older man. His skin is wrinkled, his body is arthritic, and aged. The mother dies immediately after his birth, and the Father, disgusted at the site of the child, abandons him at the doorstep of an assisted living home. The boy is adopted by Queenie (Taraji Henson), a caretaker at the home. She sees the boy as a miracle, and takes him into her care, naming him Benjamin. Based on the condition of Benjamin’s body, they believe that he does not have much long to live, but Queenie raises him, trying to give him the best life he can have. However as time passes, they watch Benjamin grow younger, but his young mind older.

Benjamin meets the granddaughter of a resident at the home, Daisy, and is instantly in love. Daisy can tell that Benjamin is a lot younger then he looks, and the two instantly connect. Thus begins the romance between two souls who are destined to be together, but unfortunately, while one grows old, the other grows young.

Overall, I really enjoyed the film, with only a few moments where it felt a bit on the slow side, other then that, the pace is good. The only thing that bugged me was the backdrop of Hurricane Katrina, I didn’t feel this added much to the story, other then giving the time period a point of reference. It didn’t hurt the story, but I definitely question its inclusion. The film was superbly cast, and the makeup was un-freaking-believable. Honestly, if this doesn’t win the makeup category, I’ll be shocked.

The chemistry between Pitt and Blanchett is excellent, they both prove how good they are at what they do. Pitt’s performance in last years ‘Jesse James,’ went largely under the radar, but his work here was very well done and unbelievable. Blanchett was gorgeous, and her love convincing.

The film marked the first time Claudio Miranda worked as Fincher’s Cinematographer. In the past he’d served as Chief Gaffer for Seven, Fight Club, and additional photographer for Zodiac, but he’s built up his portfolio since. The film is lit and staged well, the camera moves slow and calculated. There was a lot of subtlety in the camera work and art direction that can be looked at in detail, but unfortunately not without spoilers.

David Fincher has an extremely diverse body of work, but has never seen recognition by the Academy. It would be tragic if this were not his year to garner at least a nomination. Overdue recognition has been the theme of the past few Academy Awards, so this would not shock me. Does Fincher have a chance of winning? Definitely, but, he’s alas a young Director, with a lot more in his future.

Eric Roth built a wonderful script, although, there were definitely times (especially with Benjamin and Daisy’s relationship) that I couldn’t help but be reminded of Forrest Gump, but those moments were few and far between.

‘The Curious Case of Benjamin Button’ is about living life to the fullest and realizing that nothing will ever last, no matter the circumstances. It is an epic, timeless, beautiful film, and I hope to see it do very well.